After finishing Strangers on the Earth, I said only half-joking on Letterboxd that it was precisely the sort of film that would have bored me to tears had it been directed by Terence Malick.

Yes, that comment probably says more about me than it does about the film, specifically that its leisurely, meditative qualities and lack of concern for narrative aren’t features that typically draw me to films. Films about the Camino de Santiago are becoming almost as faddish as the pilgrimage itself, and my interest in them is usually commensurate with how effectively they use the setting to tell a story about the people on it. When I realized that Strangers on the Earth wasn’t really going to focus on cellist Dane Johansen so much as use his project as a gateway to a broader examination and description of the Camino itself, I almost turned it off. But I’m glad I didn’t.

Johansen, who is also listed as an executive producer, had an idea to walk the Camino with his cello, making recordings at various stops. Though he did make the pilgrimage, the experience was not what he envisaged, and the film morphs pretty quickly into something else: a mosaic of people walking the Camino and an orchestra of different voices providing their own reasons for doing so.

One person I watched the film with, who knows more about the Camino then I did, felt frustrated at the shift in emphases and complained that “the film didn’t tell me anything about the Camino I didn’t already know.” 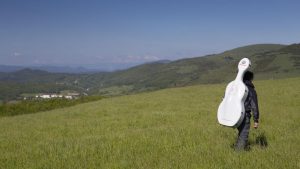 Despite the seeming bait-and-switch, what saved the film for me was some nifty camera work and skillful editing. One of the things that make essay films so difficult is that the cinematography is often too literal or too abstract. Also, scenes can too often become the same length, giving them a monotonous feeling. Strangers on the Earth mostly avoids these pitfalls. Some of the shots, such as those of pilgrims burning things at land’s end, are literal. But others are visually interesting in and of themselves. (One beautiful shot is of a bridge that crisscrosses over a highway. Rather than pan, the camera remains stationary, and we see hikers move in and out of the frame, reinforcing the theme that hikers move in and out of each other’s stories during the Camino.)

Shots are varied in length which keeps viewers engaged visually, sometimes inviting you to pay closer attention and sometimes conveying that key moments happen in the context of continuous activity. One thing we don’t get much of is talking heads. The narration is usually in the form of a voice-over, such as when a self-professed Catholic snob derides people who don’t walk the entire path, spoken over the image of a woman getting out of a taxi.

Without getting bogged down in too much history, the film also reminds viewers of both the age of the Camino (dating back to Charlemagne) and also the relatively recent resurgence of its popularity. One man making walking sticks reports living at a time when he would never see tourists on the trail. While the film doesn’t dig deep into the causes of such changes beyond mentioning the success of The Way, it does show touch on how the influx of people is gradually changing the pilgrimage experience from being a solitary one to a social one. Whether that is for good or ill depends largely on the motivations of the traveler.

As indicated earlier, the film might play better for those newly interested in the Camino than for those already versed in its history or who have experienced it personally. I am halfway between those two groups, having some previous knowledge, and I found the film fresh enough to hold my interest. In addition, I appreciated its filmcraft more than I expected. Recommended.

Strangers on the Earth is available on Itunes now and will be released on DVD October 2 by First Run Features.