The little girl walks and sings. Her affect and gestures are familiar, easily recognizable to anyone who has spent time around children. But the words, translated from French, are not some memorized advertising jingle or relentlessly pounding pop song chorus. They are devout, abstract, and deeply serious. Then she does a somersault, landing in a full cheerleader’s split with arms raised triumphantly to the sky. Vive la France! Yay God!

That moment is not quite an all-in bet, but it is emblematic enough of the film’s strengths and weakness that most viewers will know instinctively if they are susceptible to its very strange spell.

In my book, that strangeness is an overall positive. Fewer subjects need to be defamiliarized at the movies as much as Christianity, and the ecstatic, charismatic elements of that tradition are ones that are particularly susceptible to our modern tendency of divorcing current practices from the history that informs and precedes them.

“For once, at least, grant one of my prayers,” Joan sings to God. It’s the sort of frustrated impatience implied by human nature and often lost in the broad biographical gaps of our historical records. Years can pass between when Moses kills an Egyptian and when he comes upon a burning bush, between when a young Jesus wanders away from a caravan and when he enters the wilderness to be tempted at the start of his formal ministry. Even when speaking of our most revered and chronicled figures, more of their lives have been forgotten than remembered. 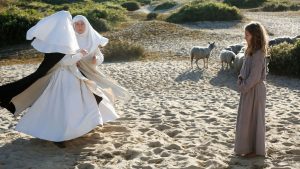 Plus, what we think of as being biographically relevant changes. Increasingly we want to know not just what people did of significance but how they did it — and how their biographical context informed and influenced the people they became. Jeannette presents Joan as a child of war. Famers care for the land that soldiers and rulers raze, and the longing for a mighty general is expressed less as a nationalistic aspiration than a human groaning to be free from an endless cycle of bondage and toil. “Your souls suffer as an accomplice to eternal evil,” one of the lyrics announces, underscoring the fatalism and resignation of those who have never really experienced a world that wasn’t at war. As a university professor who is only a year or two away from teaching students not yet born when 9/11 happened, I was moved and troubled by the portraits of childlike light and innocence struggling to express itself in a dark, dark world.

So far, so good. My biggest reservation, though, is an issue that plagues many musicals. Because so much time is devoted to the songs, it is hard for the narrative to progress or the characters develop. This is particularly true when the lyrics are of a piece; after a while, one devout platitude runs into another. Dumont and cinematographer Guillaume Deffontaines do a fine job of varying the blocking (a scene with one nun standing in front of another is particularly mysterious and oddly disorienting), but the setting is sparse. The ascetic visuals are appropriate to the themes, but for viewers calibrated to a bit more pace, the film can lag at times.

Nevertheless, Jeannette is worth checking out if for no other reason than that it is different. In an age where seemingly every other film is about a comic book hero or CGI monster, different is good.

Jeannette: The Childhood of Joan of Arc will be available October 2, 2018, on Blu-ray and DVD from KimStim.

Tags: Bruno Dumont, Jeannette, The Childhood of Joan of Arc