Nelly begins with a well-executed though somewhat conventional scene of a teenaged girl at a microphone. She is singing “Those Were the Days,” and she is stiff and self-conscious. Awkward. Gradually she loses herself in the song and loosens up. She becomes more expressive and hence more pretty. A transformation is taking place. Then she sees her parents looking disapprovingly at her in the audience and, in an instant, the confidence collapses.

The girl is a young Isabelle Fortier, and she will grow up to take the pen-name Nelly Arcan, under which she will write Whore, Hysteric, and other works based on and prompted by her experiences as a high-end prostitute. The rest of Nelly never quite lives up to the promise of that first scene. There are a number of other well-realized bits, most anchored by a terrific performance from Mylène Mackay as the adult writer and prostitute. What those scenes lack is a meaningful narrative to make them coehere. Arcan remains an opaque, constructed figure. Whether she is constructed by herself (and to what purpose), by the film, or by the broader culture that needs to convince itself that its misogyny is more or less than what a bald recitation of facts about the sex industry would make it seem remained unclear.

The film does an admirable and fine job at chronicling the emotional and physical wear and tear of a life in the sex trade. Each degree of that arc is mapped carefully. In an early scene, the workers compare their “reviews” posted online; in a later one, Nelly’s john complains that she doesn’t live up to her picture in the escort service’s profile. In an early scene, Nelly draws out a shy customer by convincing him how much she desires him; in a later one, she finally consents to a particular sex act after much badgering and bribing. Her facial expression shows that she finds it both degrading and painful. She goes from being chased by photographers and drunkenly pulling a man onto the dance floor to running from a violent client and fantasizing about suicide.

Given the culture’s infatuation with sex and prostitution, periodic reminders of the trade’s dark underbelly are hard to criticize. But I’m not sure what the take away is supposed to be here beyond that prostitution is destructive to women, even (perhaps especially) to ones who enter it semi-willingly. Hot Girls Wanted, Pornocracy, and She’s Lost Control have already deglamorized the topic, while Lovelace has demonstrated just how hard it is to transfer complex writing about sex onto the screen. With sex, the medium may not be the message in its entirety, but it sure appears to influence heavily how complexly that message can be presented.

There is a scene late in Anthony Minghella’s The Talented Mr. Ripley where a man who has worn a mask for so long worries if he will ever again discover his true self. I wondered if Nelly was such a figure and if her novels and her therapy sessions were attempts to find and release the imprisoned self that was lost somewhere in between the first scene and the rest of the movie. 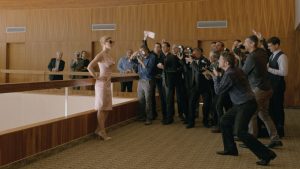 Alternately, I wondered if Nelly was meant to be some sort of precocious savant, a genius writer trapped in the body of a call girl? But people do take her writing seriously, both in the film and outside of it, and she never appears to try to parlay her literary success into an exit from the job that provides her with her source material.

Nelly the film can be defended (if any defense is needed) on the grounds that Nelly the person apparently was all these things–beautiful, suicidal, talented, depressed–and more. It is artfully photographed without seeming tawdry, and it treats its subject matter with respect.  Ultimately, though, the film’s “some things are true, other’s not” dance left me more confused than appreciative or enlightened. At times it felt like Nelly wanted to have the weight of a true story without any of that label’s responsibilities. At others, it felt like it wanted to have freedom from the confines of any sort of narrative structure. That’s fine, up to a point, but it is hard to present a person (Arcan) or a subject (prostitution) as both inscrutable and meaningful. The film’s opaque writing strips whatever parts that are true of their urgency and leaves us (or left me, anyway) with the impression that we’ve been told too much yet understand too little.

Nelly opens in New York City on September 4, with screenings in Los Angeles to follow. For more information on the film, see Cinema Libre.