For me, the key moment in The Big Short comes about three quarters of the way through when Mark Baum (Steve Carrell) meets with an arrogant high-finance, Wall Street jerk. Baum is one of the few Americans with both the knowledge and understanding of the financial sector sufficient to anticipate an imminent mortgage collapse and global financial catastrophe.

Baum can see it coming, but the truth is so counter to prevailing certainties, so masked by the widespread ignorance about what the processes we use every day are and how they work, that he can’t quite believe that nobody else sees it. Only his white-hot anger at the criminal arrogance and sanctimonious stupidity of those who claim he cannot understand what they don’t allows him to think the unthinkable. It takes a big push to get past the habits of thinking and the weight of mass peer-pressure.

The Big Short is about people who got rich by short-selling credit default swaps–people who made obscene amounts of money by being able to accurately predict the suffering of others. That they themselves were not the root cause of the suffering makes it possible for us as viewers to not hate them; it doesn’t necessarily keep them–or Baum at least–from hating themselves.

Because it has to do with banking, The Big Short will probably draw a number of comparisons to Martin Scorsese’s The Wolf of Wall Street. I despised that film, finding its characters too venal to empathize with and the film too self-satisfied with its own excesses. I liked The Big Short ( ★★★★) a lot more, precisely because it finds some moral complexity in its people and situations without retreating to moral relativism. 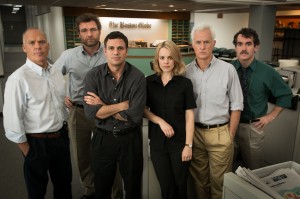 A better point of comparison then, for me, is Tom McCarthy’s Spotlight. Both films are about small groups of people who become aware of systemic corruption on a previously unimaginable scale. Both show their characters struggling not just to reveal a lie, but to fathom it. The incredulity with which the films’ respective characters process the dawning realizations contribute to two admittedly different emotional tones: grief/sadness, and white-hot anger.

But in both films those usually simple emotions are complicated by the insider-outsider status of those becoming aware of the truth. Because of that, the films wrestle with questions of complicity. The reporting team in Spotlight has not participated in the abuse of children, but they have participated in a process that has up to that point turned a deaf ear to the whispers it has heard. The money-makers in The Big Short have not participated in the fraudulent mortgages and dishonest debt-labeling but they understand, or most of them do, that being professionally successful and emotionally vindicated will mean that a lot of relatively innocent people will be hurt. How persistent are we called to be when our warnings are scoffed at and ridiculed? And if we can’t get the Captain to steer away from the iceberg, are we required to wait until the collision before using one of the lifeboats to abandon ship?

What makes Baum the most interesting character in The Big Short is that his disillusionment is the most painful. When he himself doesn’t understand the depth of his own anger at the financier, one of Baum’s partners opines that for all his surface level cynicism, Baum is–or was–a true believer. It’s not that he cannot fathom corruption, even criminal corruption, it’s that he cannot fathom the near-universal indifference to and acceptance of it. When he and his team interview two loan managers who openly describe targeting immigrant and/or no-income-no-job applicants for high-risk variable-rate loans they expect to fail, Baum tells his partners he cannot fathom why the loan officers are confessing so easily. “They aren’t confessing,” one partner replies, “they’re bragging.”

Other characters may not be happy about the number of people who will be hurt if the mortgage industry collapses, but Baum is the only one emotionally invested in the system being incorruptible. For Michael Burry (Christian Bale) the information age is a giant Rubik’s Cube, and it’s all about being acknowledged to be the smartest guy in the room. Money matters, but only as an external scorecard that verifies he is the winner. Jared Vennett (Ryan Gosling) may have felt anger at some point, but he seems to have passed through surprise at how few people recognize the emperor has no clothes and arrived at a pragmatic it-is-what-it-is stoicism. Besides Vennett has that salesman/evangelist drive that knows he will get ninety-nine “no”s for every “yes.” Who has time to grieve the lost? Or perhaps Vennett is more like the doctor who tells a patient she has cancer. He may know, may even say, what the causes most likely were, but his focus is on treatment. What should each individual do right now for the best chance of survival?

Complex emotions require some serious acting chops, and the cast of The Big Short is uniformly excellent. There were a few moments early where I feared Steve Carrell would simply give us an iteration of his madcap shtick, but as the film unfolds, he actually becomes more weary and restrained. I might have wished that someone other than Brad Pitt would have delivered the liberal reminder that real people would be hurt. Not because Pitt is bad; he’s great as usual. Just because he is flirting with becoming typecast as the moral conscience of the world. Bale plays Burry with eccentric tics but doesn’t preen in doing so. The one scene where Burry responds to the “you could be wrong, couldn’t you?” question is pitch perfect.

And Ryan Gosling…oh my. I am glad this film came out in the same year as Listen to Me Marlon, since the earlier documentary reminded me of Brando’s near unique ability to fuse charm and menace. I’ve always thought that the uber-success of Tom Cruise (whom I generally like) has saddled us with a generation of movie stars who have no real yang to complement their suave, charming ying. Gosling has the looks, to be sure, but his emotional register feels much broader than that of his peers. (Compare Blue Valentine, Lars and the Real Girl, Drive, and Crazy, Stupid, Love.) Vennett’s explanation of the mortgage packages using a Jenga board as a prop is probably destined to join Alec Baldwin’s monologues from  Glengarry, Glen Ross as an actor’s audition staple. When it starts, you know exactly how it will play out, but it doesn’t matter. The actor refuses to luxuriate in the ripeness of the dialogue (the house is on fire, and I’m offering you insurance), holding just the tiniest bit back. Salesmen, like stand-up comedians, have to read the room. It may be a prepared speech, but his job it to convince you that it is extemporaneous.

Much ink will be spilled over The Big Short‘s stylistic flourishes. Honestly, I could have done without the breaking of the fourth wall and the celebrity cameos to explain banking jargon in plain English. It wasn’t overdone, though, and part of directorial artistry is knowing when to not go back to a well one too many times.

Ultimately it was content, not style, that won me over to the film’s side. Much as with war films, the first wave of recession films–Inside Job, Capitalism, Arbitrage, Up in the Air, Margin Call, Wall Street: Money Never Sleeps–tend to be expressions of anger. Distance doesn’t necessarily make us more forgiving, but it can make us more nuanced in our anger. The Big Short feels to me as though it is as least starting to ask some broader philosophical questions in conjunction with its expression of specific, contextualized rage. It is to finance as Fury was to war: a film that gives expression to the pain, disgust, and bewilderment of those who find themselves in the trenches of a mad world not of their making and that asks whether it is possible to survive in a  world stripped bare of even the smallest pretenses of honor and decency without losing your soul in the process.