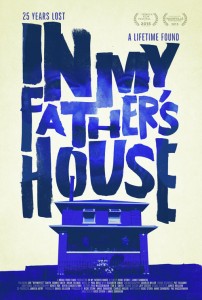 “I want my dad in my life, but I grew up with addicts…”

Che ‘Rhymefest’ Smith is a bigger man than I am. Let’s get that out of the way first. Whatever criticisms I might have about In My Father’s House, the documentary about Smith’s attempt to reconnect with the father who abandoned him, can’t discount the magnanimity of the man at its center.

As the film opens, we are given some bracing statistics about the absence of fathers in American homes:

These statistics should gives us pause, and any film that puts a human face on them should be welcome and esteemed. Smith, who is probably best known for having shared a Grammy award with Kanye West (for “Jesus Walks”) and co-writing the song “Glory” (heard at the end of Selma) deserves credit for trying to reconnect with his father even after the man he finds spends most of the reunion haranguing him for money to buy a “pint” and displaying a penchant for saying exactly the wrong thing at the wrong time. Example: “Man, the only thing I did right was Che….” says the man who conceived Che but did not appear to make any meaningful contribution to his son’s character formation or eventual success.

The most interesting thing about that quote, however, is how deeply Smith is beaming as his father says it. We may be indignant on his behalf, seeing the quote for the flattery or self-delusion that it most likely is, but so deep is the longing for paternal affirmation that the musician’s response is one of deep gratitude.

Indeed the most effective parts of In My Father’s House are those where Smith articulates the psychological consequences of being fatherless. As an explanation of Che’s motivations, these musings make sense. But the subsequent project is more prosaic than profound. Che confesses that the reunion is mostly for his own sake, but he adds as a postscript that it will “maybe even turn that around for him.”  Anyone who has ever been to or known someone in Al-Anon (a support group for friends and family members of problem drinkers) will likely cringe at that moment.

After a strong first act, the film runs into two structural problems. The nature of addiction makes the narrative thread about Che’s father open-ended. Since an alcoholic is never really cured, the documentary’s narrative arc doesn’t always have an organic shape. Also, the paternal rehabilitation is interspersed with a portrait of Che’s own domestic life that divides the viewer’s attentions and feelings. Che wants a paternity test for a putative daughter, and when his current partner gets pregnant he frames the non-accidental pregnancy as his first experience of real fatherhood–the way things are supposed to be. Viewers may be ambivalent at that moment.

One understands why this material is included since it preempts accusations of whitewashing the story. And Che’s own struggles are a powerful reminder of how much what we attribute to nebulous terms like “character” may, in fact, be learned behavior. It’s not that that the film is wrong for including these bits, but they do divide our focus. At ninety minutes, the documentary feels both too long and too short. As a story about one attempt at reconciliation, it contains a lot of filler. As a broader portrait about the effects of fatherlessness, it needs some way (other than the opening statistics) to extend beyond Smith’s story.

The conclusion of the film, which I won’t reveal, does suggest that Smith has re-calibrated his expectations about what he can expect from this relationship. What remains consistent is the admirable nature of his attempt regardless of its final outcome.

In My Father’s House is currently in select theaters. To find a screening in your area, check here.