Actor for Hire has everything I appreciate from an indie film–good storytelling, solid performances, high production value–but still it maintains that “indie” vibe. It might be a step below studio fare in terms of entertainment value, but it is still a very solidly done film.

The pacing of this film is tied to its tone. In its own way, the movie is relentless. Despite the fact that not much actiony action takes place, the progression from scene to scene is fluid and quick. It is an earnest film, persistent in its themes and relatively true to its subject matter. Much like the main character Jesse, the film just keeps at it, never giving up.

A very cool opening starts this movie; that is, it just starts. We find Jesse in the middle of an audition, and without any exposition, we know exactly what we need to know: Jesse is a young, average-looking, bald guy trying to make it in Hollywood. The plot progresses as Jesse, frustrated by the fact that casting calls keep asking for hair, buys a wig and lands a part. He then meets several interesting characters and begins his slow climb up the Hollywood ladder, falls down from it, then gets up again.

What this film does better than any other film I’ve seen about the acting, or music or any other arts is people. Jesse’s success and failures all depend almost entirely on who he knows and who they know. The plot is less a progression of events and more of a sequence of friends Jesse makes. This is a true observation about this type of job: in any creative, self-employed field (and to and extent, really any job-type) it matters less how good your skills are and more how good your connections are. Jesse is an okay actor, and the film did a good job showing that he had some talent but not the transformative power of a Christian Bale or anyone like that. What gets him anywhere in his career is who he knows, and who he knows happens to be a movie star.

Early in the film, Jesse befriends the mega-star Joel Hogan (played by Joel Hogan). Joel is going through a hard time after his celebrity break-up and Jesse is able to comfort him. Joel appreciates Jesse’s realness and honesty and doesn’t realize Jesse is wearing a wig. Connection after connection is made for Jesse all because of a famous friend he made after he landed a part because of his wig.

That wig becomes an obvious symbol of the persona/mask that everyone wears in Hollywood. Jesse feels like he has to wear this wig to be anything and yet he complains that everyone in L.A. is fake. Of course, the wig is what causes Jesse to fall from the good graces of the powers that be, and after he finally sheds the headwear….

Do you want  cynical ending or a happy one? The film opens with such a good understanding of how the industry actually works: you gotta be good at the right place and the right time in front of the right people and you have know someone who knows where that place is and who to be in front of. Our belief in a meritocracy would need Jesse to become successful based solely on his talent and ability. Our cynicism, which the rest of the film plays upon, would see any happy ending as unrealistic. So either way, some people will probably be disappointed with the end. 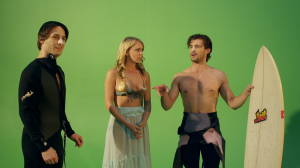 They did nail the auditions though. I used to dabble in acting myself, before I got into a much more secure line of work—music. The audition process is painful. It is cringy. It is tedious, nerve-racking and really just terrible. You get a script anywhere from two weeks to two hours before the audition, memorize your lines, decide what your character is feeling then you stand in front of two or three people who have been at it for ten hours and probably need to poop. They say “go,” and you have to dazzle them. It’s awful. The film captured those feelings so well, I started having flashbacks to my worst auditions and had to pause the movie to cry into some Ben & Jerry’s.

The film also did something aesthetically that I found really quite pleasing. It looked great and had clear production value, but it still maintained the feel of an indie movie. It’s a hard balance to strike: you usually either get high-gloss or raw, not a smooth combination of both.

The greatest balance though was in the characters. So many films with such a clear theme (masks) get so heavy-handed trying to get that theme across they forget that characters are the vehicle by which the theme is executed. This movie brought me into the group of friends that Jesse makes, and took its time to develop their relationships thoroughly and well.

So overall, this is a very solid indie movie. The theme is present but not too deep or heavy-handed, the performances are solid and real, (in fact, the actors all play characters named after themselves) and for the most part, it gave the impression of how the industry really works. I do wish that it was a bit funnier and that’s the reason for the 3½ out of 5 stars rather than higher: a few more goofy moments (and there were a few so the precedent was established) and a couple of quotable scenes would have made this movie a cut above where it stands now. But, if you’re interested in a fairly realistic portrayal of persistence in an artistic field, this is a go.