In the opening minutes of Top Spin, a documentary directed by Mina T. Son and Sara Newens, 17-year old Michael Landers wins the under-21 American men’s table tennis title. As his prize, he nets a grand total of $250. Walking over to his mother, he jokes “I’m rich,” before he deadpans to the camera that he can “buy three people dinner at that restaurant the other night.” If there is one thing Top Spin makes clear, no one is getting rich, in America, at least by playing table tennis. Beer-pong players win more at their national championships. Patrick Reed, who quit high school to play table tennis years ago to play professionally, is the best known American men’s player, but even he admits, frankly, “I’m not motivated by money or else I would have quit this sport a long time ago and got a real job.”

Top Spin (★★★½) isn’t a documentary, however, that focuses on hardened veterans, like Reed, just trying to make a living on the edge of professional sports. Rather, Top Spin is brimming with the youthful optimism as it follows three teen table tennis hopefuls: Landers, 16-year old Ariel Hsing, and 15-year old Lily Zhang. All of them have won numerous tournaments and traveled to far-flung places to hone their skills in preparation for the ultimate prize of reaching the 2012 London Olympics. The dramatic tension of the Top Spin mostly consists of following this quest for qualifying while asking: Can their childhood dreams come true?

And Son and Newens never let the audience forget just how young Landers, Hsing and Zhang are. Fluid montages of table tennis action are interrupted by Zhang painting her nails, Landers crafting a smoke bomb out of ping pong balls, and minute academic details, a math lesson, a meeting with a guidance counselor, studying for the SAT, that could fit neatly into any recent coming-of-age film. Landers, the oldest of the group, is at the most pivotal stage of his table tennis career since he is unsure whether he will ever get another chance at Olympic glory. College looms and willingness to commit to grueling workouts and to hit endless balls into a net fades with age.

Landers, Hsing and Zhang share more in common than just Olympic hopes and a strong work ethic; they have been gifted with extremely supportive parents. “When I was young, I played for my parents,” Jun Gao, an American coach and former world champion from China, who adds that she only played for herself after she retired and moved to America. In contrast, the parents of Top Spin put the competitiveness of Gao’s parents (and countless travel baseball dads) to shame.

“Not many people in life get to follow their dreams. And Michael is doing that,” Lander’s father, Stanley, tells us. Ariel’s father, Michael, taught her the basics of the sport and continues to coach her, but also declares: “We didn’t talk about prodigy, we don’t talk about talent, we care about the process, the hard work, not the results.“ He stays up until 2 or 3 a.m. watching and editing video clips to make Ariel a better player and this devotion of the highest order forms the basis for a powerful relationship. “My dad, I always joke with him that we’re best friends,” Ariel says fondly.

Landers, Hsing and Zhang try their best to stay in contact with friends their age. Zhang argues  with her mom over what skirt to wear to her friend’s party. “Your friend’s birthday party is really important to you,” she says, joking that it’s “more important than table tennis.” Separation is a common thread throughout Top Spin, and one feels the film could benefit from added stillness and reflection at times. Because professional table tennis players seem to always be in motion, never more than a few feet away from their opponents or the crowd, the emotional isolation of these individual athletes isn’t easy to capture.

Top Spin is at its best when it reveals the inherent loneliness of Olympic dreams. One brief moment, shows Landers, training in San Jose, on a Skype call with his sister, Sara, who claims it’s been three weeks since she’s seen him. “You’re like a 30-year old divorcee,” she says, before the camera pans to a hotel table covered in bags of Sour Patch Kids, pretzels and other snacks. “It’s not to bad. I’m used to it,” he replies.

Top Spin also deserves high marks for technical and design elements that make the film easy to follow. A flip calendar keeps us updated on the fast-approaching Olympic trials. A helpful bracket graphic explains the qualifying process and ensures that we know just how close our hopefuls are to notching a spot. Particularly brilliant is the film’s scoreboard graphic, which has a clean, transparent display that should make ESPN jealous. All of these details reflect well on table tennis, exhibiting professional production values that the sport deserves.

If you payed close attention to the London Olympics, you probably already know how the story of Top Spin ends. No matter. The documentary is worth a viewer’s time because it poses questions inherent to not just not table tennis, but to any sport that shines in the Olympic spotlight, only to be forgotten for the next four years. 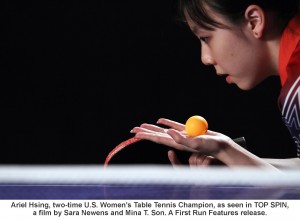 What is the value of success without fame or fortune? How should athletic dreams be balanced and sacrificed for the future? These are questions that Top Spin’s impressive table tennis stars and their parents ask themselves again and again. By the end of the film, their answers are unexpectedly touching, united by a sense of pride in sacrifice, in achievement and most of all, in growth. Now, with 2012 long gone and only 350 days remaining until the Rio Olympics, Top Spin leaves us with the feeling that Landers, Hsing and Zhang aren’t done yet. We’ll have to tune in next summer to see how they’ve grown.