Ken’s Note: As most cinephiles could tell you, July is one of the month that The Criterion Collection offers its semi-annual 50% off sale. Given the label’s array of titles, taking advantage of that sale can be daunting. I’ve asked friends and colleagues to make write up one of their favorite or newly acquired Criterion discs. In this column, I discuss Roberto Rossellini’s Cartesius.

The reasons to procure a Criterion DVD generally fall into one of several categories:  interest in the sound or picture make one want a clean transfer, academic interest in the film makes one interested in the extras, or desire to screen a hard-to-find title in an artists’ filmography make one willing to pay a premium.

Cartesius, Roberto Rossellini’s television movie/civics lesson about philosopher Rene Descartes, definitely falls into the latter category. Oh, the print is fine, and it is interesting to see Rossellini work in color, though the browns and blacks begin to feel monotonous after awhile. And the sound…well, the film was slated to be done in English, actually recorded in French, and eventually dubbed into Italian. Since (according to the liner notes) Italian television was the only place the film was screened, the dubbed version is the only one we have on the film. Dubbed films always sound artificial, since we lose most ambient sound, and it is hard to shake one’s visceral association of dubbing with low quality films.

As for the extras, the Criterion disc comes with an excerpt from Tag Gallagher’s notes on Rossellini’s history films. (The entire essay is included with The Age of the Medici DVD that is often bundled with Cartesius and Blaise Pascal.) The excerpt itself is a bare synopsis of the production history, though the larger essay is wonderfully helpful, particularly in contextualizing Rossellini’s infamous assertion that “cinema is dead.” But those notes are available on Criterion’s web page, and one needn’t buy the box set in order to read them. 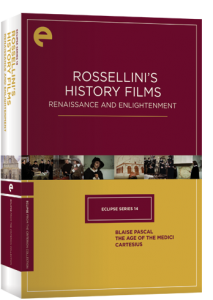 So the principle reason to find and screen Cartesius is simply because it is a Roberto Rossellini film. As Gallagher points out, Rossellini turned to television in the latter part of his career (the director died in 1977) because he thought it could, more than film, “awaken consciences.” There is both a circularity and an irony to this hope. Did not early Russian formalists hope that film, more so than literature, could become a vehicle for social and political consciousness raising? The “mass” in mass media refers to the ability to reach a massive audience, so give Rossellini props for recognizing, ahead of the curve, that television would and could have a deeper reach than film. But it has turned out that the masses want cheap and accessible art and entertainment; they don’t necessarily want film and television to be a substitute for an education. Today we live in an age where the reach of television is even broader, yet the reach has also meant diversification, and and a long tail. There may be  a (little watched) History Channel devoted to the sorts of visual textbooks that Rossellini is crafting, but it won’t change the world when the masses can and do click past them to get to Naked Dating on VH1.

Gallagher also briefly alludes to the fact that historians didn’t always embrace these history films. I can’t speak to the period detail, but Cartesius does a good enough job of creating an historical backdrop to frame and inform Descartes’ biographical narrative. “You are in too much of a hurry,” a superior tells Descartes when he asks for permission to read two more books in the church’s possession.  The philosopher’s interest in and passion for math and science makes other Christians uncomfortable, but he insists that the sciences “will help us discover and love God”  (emphasis added). The word “discover” might here give pause to some Christians who believe that at transcendent God cannot be found, only revealed. Yet overall the conflict between a scared institutional church and a sincere seeker is one that can be seen around us nearly every day in the Christian west. (I count myself fortunate to work at an institution that “embraces the conviction that there is no conflict between the life of faith and the life of inquiry.”)

The word “certainty” comes up with regularity throughout the film. Descartes longs for certainty, and he appears to admire Galileo precisely for the possession of that certainty. Of his own interests, he says that “mathematics is the sole discipline that provides us with certainty.” Ultimately this plays out less as a conflict between faith and reason and more as one between inductive and deductive reasoning with the former embodied by Galileo and the latter by Aristotle. I’ve always found the church’s near veneration of Aristotle hard to understand, but here the film helped me. It’s not so much that Aristotle is any closer to Christianity than any other classic philosopher, but his methodology, resting as it apparently did on air tight logic rather than verifiable data, surely must have been attractive to the mindset that preferred to invest its energy defending presuppositions rather than accepting uncertainties.

Ultimately Rossellini’s artistic reputation is always going to rest on his Neorealistic films created in the wake of World War II, but the history telefilms are still worth a look. While they don’t ooze with the sort of historical prescience one sees in the Robert Bresson films of the same period, they do anticipate some of the social tensions of our day–and they remind us of the foundations of those tensions.