Ken’s Note: As most cinephiles could tell you, July is one of the month that The Criterion Collection offers its semi-annual 50% off sale. Given the label’s array of titles, taking advantage of that sale can be daunting. I’ve asked friends and colleagues to make write up one of their favorite or newly acquired Criterion discs. Ryan Holt weighs in on The Leopard. 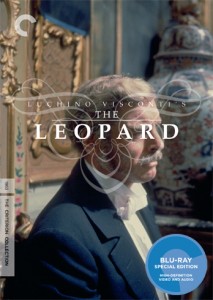 A nobleman-turned-Marxist, filmmaker Luchino Visconti established his career as one of the fathers of Italian neorealism, a movement that was driven by its attention to the everyday life of the poor and working class. The operatic Senso marked Visconti’s departure for a different kind of lush, operatic storytelling, though he never left his attention to class tensions behind. These two strands reached their most brilliant combination in The Leopard, an adaptation of the classic novel by Giuseppe Tomasi di Lampedusa. The story centers on Don Fabrizio Corbera (Burt Lancaster), a prince who witnesses the end of his era and the birth of another.

In the first scene, the prince’s family observes a private mass, only to have it interrupted by the death of a soldier: Garibaldi’s revolution has come, and it will leave nothing the same. The ensuing hours follow Corbera as he and his family navigate the shifting social and political landscape, revealing both the hollowness of the aristocratic life as well as its astonishing elegance.

As a story about a patriarchal Italian family facing changing cultural tides, Visconti’s The Leopard prefigures Coppola’s The Godfather. There are stylistic parallels as well; The Godfather’s images of a golden Italy could almost be lifted directly from The Leopard, and the films share the work of composer Nino Rota. But no other filmmaker, not even Coppola, can quite match Visconti’s absolute mastery of the aesthetics of luxury. The Leopard offers a constant sea of visual pleasures breathtakingly composed and lit for the camera, its opulence almost overwhelming.

To an extent, this luxury is almost the point of the story, which unfolds slowly over the course of the film’s three hours. The camera seemingly exists to absorb the details of this lost way of life, to bear witness to a society which will never be seen again. Lancaster, with his towering stature, chiseled face, and piercing eyes, fits perfectly into this environment (Lancaster’s voice is dubbed into Italian here, though his real voice can be heard in the truncated and inferior English-language version of the film). He navigates the political tensions of a changing Italy with the dignity and grace of a man who has accepted that the world does not belong to him.

The world has passed to the prince’s nephew, Tancredi (Alain Delon), who falls in love and marries the ravishing Angelica Sedara (Claudia Cardinale), a low-born beauty, serves as the film’s avatar of Italy’s future. Cardinale would later also serve as the symbol of the new America  in Sergio Leone’s Once Upon a Time in the West, and she is certainly beautiful enough to carry the promise of both nations’ futures in her eyes. 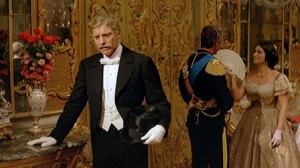 The film’s most brilliant section, a climactic grand party that proceeds for forty gorgeous minutes, unites Lancaster and Cardinale, the old and new worlds, in a brief waltz. The weary old man comes to life, reinvigorated by the beauty in front of him. The moment is the stuff of which dreams are made. But the dream ends, as all dreams do. Over the course of the evening, the prince finds himself in a room with the used chamber pots of the ball’s many guests: the luxury ripped aside to reveal the vulgar reality underneath.

The Criterion release, available both on DVD and Blu-ray, preserves the visual textures of the film in all their extraordinary lushness. The release presents both the Italian and American versions of the film, along with a commentary track by film scholar Peter Cowie, an hour-long documentary called A Dying Breed: The Making of The Leopard, video interviews with producer Goffredo Lombardo and Millicent Marcus, promotional materials and production photos, and a booklet with an essay by film historian Michael Wood.

Ryan Holt manages the film blog I’ve Seen That Movie Too. He can be followed on Twitter under the handle @_SeenThatMovie.

Tags: The Criterion Collection, The Leopard