Jurassic World (★★) is not a bad movie, but it is such a contentedly, non-aspirationally mediocre one that it often feels worse than it is. It is a better film than Jupiter Ascending, though the latter at least had some failed ambition. It is as good as San Andreas, though that is hardly the metric one imagines the once beloved franchise wishing to be measured by.

As the movie opens, Jurassic Park has been reopened, God only knows how. Two kids, Sullen Teenager (Nick Robinson) and Irascible Tyke (Ty Simpkins) are dispatched to the amusement park so that they will have one last memory of their divorcing parents not really being interested in spending time with them. They get special access passes because their aunt, Soon-To-Be-Punished Career Woman (Bryce Dallas Howard) has some nebulous position of authority at the park. She has teamed together with Hubris-Filled Scientist (BD Wong), to make Indominus Rex, a genetically altered T-Rex/Raptor/Frog/Godzilla/Rambo hybrid because, “Let’s be honest, no one’s impressed by a dinosaur any more.” Meanwhile Vincent D’Onofrio is wandering around looking disappointed that he doesn’t have a mustache to twirl and opining that since Owen (Chris Pratt) has trained Raptors to run towards food that the animals are ready to be conscripted into our fight against terror.

Since Jurassic plots are essentially giant Rube Goldberg contraptions set in motion by bad decisions, let me pause here to celebrate those rare, precious moments when someone in the movie exercises good judgment. The third best decision in the movie might be when a character douses himself in gasoline so that an animal can’t smell him. (Later, when another character lit a flare, I wondered briefly if there had been time for the former to change his clothes.) The second best decision may have been when Howard’s character unbuttons her blouse and rolls up her sleeves to make it easier to run away from the dinosaurs. I don’t think she ever does change out of the high heels, but we can’t always expect people to think clearly in these situations. The best decision may well have been when Pterodactyls attack a crowd of park attendees and a nameless extra grabs two margaritas (one in each hand) before running away. A former high-school buddy of mine once earned a few seconds of screen time by fashioning a costume prop that the director of his film found visually interesting; a part of me really wants to track down that extra and find out if the margarita business was in the script or improvised. I doubt he was paid as much as Pratt, D’Onofrio, or even Wong, but he had the best scene in the movie.

Jurassic Park gestured a little towards developing themes. Nature/life will find a way. The technological imperative should be questioned. Its sequels seem content to echo those themes and only develop or reimagine the action sequences. Those sequences are Jurassic World‘s self-admitted reason for being. They are louder and longer, and the kill count is up significantly, but I won’t say that the spectacle is any more spectacular. 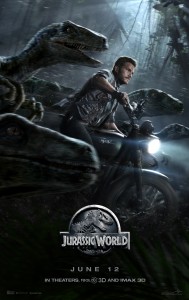 If anything, I find the film’s horror sensibilities and PG-13 rating don’t mesh well. Superhero films manage to find a way to depict chaotic destruction with a minimum of kill shots, but when your instrument of death is an animal rather than a gun or a natural disaster, it’s hard to make death clean in a shoot-and-fall kind of way. I docked Jurassic World an extra half a star because one minor but innocuous character received a death so horrific and so gleefully rendered that it jolted the film out of “it’s all just make believe” thrill ride fun mode and into “[shudder] that’s really awful if you think about it” territory. Certainly one expects D’Onofrio’s character to get chomped because the movie spends 110 minutes telling us he deserves to be. But even when his moment comes, the camera looks away. The film lets us hear his screams and shows some blood splatter, but it moves on before showing us anything as disturbing as we see in, say, Jaws.

That PG-13 coyness ultimately bothered me a lot. The film thinks it is being cutely meta with its “no one’s impressed by a dinosaur” comment, but it is in the treatment of death where Jurassic World is most (and most unintentionally) metafictive. In and through the villain’s death, we are reassured that even in chaos we will be spared the worst trauma, that the artists and commercial forces operate under a set of rules and that, hence, the seeming chaos is orchestrated. In the death of the British assistant, however, we are confronted with enough genuine, sickening horror to be remind us that no matter how many people in charge say they have things under control, their attempts to make things “bigger, louder [and with] more teeth” sometimes get away from them.