When I was a freshman in college, one of my professors told me I should check out a famous piece of organ repertoire that was notoriously difficult and extremely virtuosic. I promptly found the score at the music library, and as I looked over the first few pages, I said to myself, “This is almost sight-readable, nothing that difficult about it at all.” I then turned another page, and the piece quickly turned into a virtuosic tour de force.

Watching The Lesson, (★★★) I was reminded of that incident, specifically by the trajectory of Nade’s (Margita Gosheva) character arc. Like the piece of music my professor recommended, Nade undergoes a drastic change in character which happens just as quickly as that piece’s increase in difficulty. However, unlike that piece of organ music which had a transition to connect its contrasting sections, The Lesson hurls the viewer from one end of Nade’s arc to the other.

The premise of The Lesson is that Nade, an English teacher at a Bulgarian elementary school as well as a part time translator, is highly principled, deeply ethical, hard working and something of a deontologist, but when she is pushed to her breaking point by the worst luck imaginable, in order to survive she will choose to do things she would otherwise abhor. The idea that everyone has a breaking point is not exactly new, and unfortunately, I did not find its presentation here particularly satisfying. 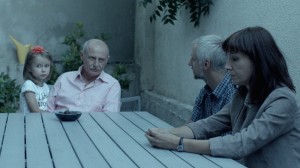 I was much more interested in the failure of community responsibility that enabled Nade to fall upon such dire straits, a theme which the film left mostly unexplored. The opening scene sets up that idea very nicely, as Nade addresses her class in regards to an unknown thief who stole another student’s wallet. Nade informs the students that each one of them will contribute ten stotinki (six cents) to make up for the stolen money, and the thief now owes the entire class money. Later Nade leaves a marked bill on her desk as a trap. When that disappears, she is nearly unable to afford bus fare, pay her mortgage, and get home. If the film wanted to show how seemingly harmless misdemeanors affect entire communities, the setup is perfect, but there is no follow through. Nade makes vague threats that the perpetrator will be caught and punished, but there is no suggestion anything will come of that either.

Meanwhile, the firm for which Nade has been translating has been refusing to pay her for months, at home Nade’s husband has been squandering the money for their mortgage payments, and the bank is going to auction off their house in three days unless all the money is paid with interest. In her quest to acquire the funds to save their home, just about every imaginable difficulty befalls Nade: a nasty fight with a rich estranged family member, empty promises of being paid by her boss, accepting a loan from a shady source, and her car breaking down almost making her late for a crucial appointment. There are other clichés as well, but to mention them would be a spoiler.

Nade has four roles: teacher, employee, wife, and mother. In all of those roles, people who should help and support her fail to do so. And eventually, she fails in her duties as well. The problem is we see small violations of her duties, such as making a reckless judgment call which might endanger her family or telling a white lie to her boss to get out of work, and the next thing we see is so extreme in comparison that it actually made me wonder whether The Lesson was supposed to be a dark comedy, because that is the only genre in which the climactic action would make dramatic sense.

Reading the press kit for The Lesson I see that the film’s climax is based upon an actual occurrence. That is believable, but if the film wanted that incident to believable in the film, then it needed to have a better progression to that incident. As it is, the film contains several good ideas, but comes across like a lesson from a teacher who only prepared a few good bullet points instead of an entire lecture.