In 2005, I recall waiting in line alongside my fellow students and professors from the evangelical Bible college I attended. Our school had rented out an entire theater screening for the film adaptation of the first book in C.S. Lewis’s beloved fantasy series. Standing in the queue with me was C.S. Lewis himself, a Bible professor dressed up as his favorite of the Inklings, giddy in his eagerness for the film to begin. There were others in costume in that eager lineup—dressed as Mr. Tumnus, the Pevensie children, the elderly Professor, and plenty of Narnian beasts.

Ten years later, the anticipation of that first venture into the world of Narnia has cooled into feelings of nostalgia. The Chronicles of Narnia films were made directly on the heels of the highly successful Lord of the Rings trilogy, and the comparisons and parallels between the Inklings’ fantasy stories were unavoidable. In many ways, The Lion, The Witch, and The Wardrobe was set up to be another blockbuster fantasy series, only with more overtly Christian themes. The three films produced by Walden Media have grossed more than $1.5 billion worldwide, despite the waning reviews and reception for each subsequent film in the series.

Do we still hold the Narnia films in the same regard as the LOTR films? Did we ever? I suppose it depends on whom you ask—the Narnia films are still staples of evangelical youth group movie nights across America. Yet when the comparison is made, the LOTR series simply has more staying power and cultural impact than the Narnia films. The LOTR comparisons come partly due to source material–Lewis and Tolkien were both in the Inklings literary group at Oxford–but also due to the similar approach from the filmmakers. Almost certainly influenced by the success from Peter Jackson’s approach to Tolkien, Andrew Adamson places a huge battle sequence in the climax of his films, filled with sweeping overhead shots of CGI creatures battling on the beautiful New Zealand landscape, giving the sense that Middle Earth and Narnia were perhaps neighboring lands.

Narnia feels like an overly “Christian” version or response to the LOTR trilogy. Because it was released the year following the Best Picture win of The Return of the King, the first Narnia film felt like a LOTR copycat, and seemed unapologetic about it. (It makes me wonder—if the Narnia films were made today, would they follow the dark young adult novel approach of popular series like Twilight or The Hunger Games?) While Tolkien’s story is an ambitious vision of world-building and narrative drama, Lewis’s Narnia is clearly an allegory of Christian theology, which lends itself more to a didactic approach in contemporary Christian filmmaking. Middle Earth is wholly its own world and mythology; Narnia is a realm we enter from our own world and subsequently bring with it our own worldviews and theology. Mythology is limited only by the author’s imagination; allegorical literature is inherently limited to the necessary connection made between one idea/story to another. Narnia’s Christian allegory is strong, but not so completely overt as to be heavy-handed or obnoxious. If you weren’t aware Aslan the lion was the Christ figure through his sacrificial death and resurrection, perhaps the line, “It is finished” would convince you. (The film also gives a small nod to C.S. Lewis’s Christological trilemma between considering a person a liar, lunatic, or Lord.) Still, without a conversion experience or the mention of Jesus Christ, Narnia stands on its own—it is a story first, not a sermon. 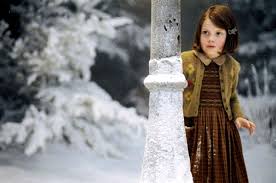 What does set Narnia apart from LOTR is its childlike sense of wonder. Georgie Henley wonderfully portrays the youngest Pevensie sibling, Lucy, with a youthful optimism and innocence that sets the tone for the rest of the film. When she first ventures into the wardrobe and enters the wintry world of Narnia, it perfectly elicits a sense of awe and delight. Lucy is the heart of the film, and the inclusion of genuinely gifted child actors—and not young adults trying to portray children, or changing the characters’ ages, akin to Walden Media’s treatment of The Giver—makes this a distinctly a children’s film. The Pevensie children talk and act like true siblings, bickering and playing in ways that many children will relate.

As the White Witch, Tilda Swinton gives an excellent and chilling performance. For many viewers, the Narnia films were the introduction to Swinton’s acting chops—she would go on to win an Oscar for her role in Michael Clayton a few years later. She is wonderfully devilish as Jadis, and she seems to be genuinely enjoying the role as she delivers every line. Her costume and character design are so interesting, a strange mixture of royal propriety with unorthodoxy—her long dreadlocks transform her from an elegant beauty to a dangerous rebel, a strange anachronism for a queen. She is an excellent foil to Liam Neeson’s charming and comforting Aslan, whose face has such a human quality to it while also remaining feline and ferocious. The CGI of the animals is, at times, distracting—we know the wolves, beasts, and Aslan are not really “there” in the same way as the human characters. Yet in a fantasy world like Narnia, the lack of realism can be forgiven—how else will we experience talking beavers?

Overall, The Lion, The Witch, and The Wardrobe is still a good film, just not as great or recognized as its ambitious Tolkien predecessors. The film communicates overtly Christian ideas without falling into the trap of being labeled a “faith-based” film. Walden Media, the producers of the first three Narnia films, no longer holds the production rights, and a new production company will make The Silver Chair, which could be released in late 2016. As I anticipate the next Narnia film, I will still hold a nostalgic fondness for the first film, remembering that costumed line in the theater filled with expectancy and hope.

Tags: and the Wardrobe, C.S. Lewis, The Chronicles of Narnia, The Lion, The Witch, Tilda Swinton