It’s seldom that I hear a film described as “relentless” and do not roll my eyes. That word has often translated to “ill-paced,” or “plot-less,” or “unintelligent.” Relentless can sometimes mean overwhelming, nauseating and boring. Mad Max: Fury Road (★★★★), however, had my eyes glued to the screen for every unrelenting moment.

Mad Max plots are quite simple when you boil them down, and this one is no exception. Just like in Road Warrior, Max (Tom Hardy) finds himself caught up in a desperate situation and reluctantly decides to help. An evil warlord/self-proclaimed deity named Immortan Joe rules his village ruthlessly, controlling the water and living in luxury while the common people suffer. His “war-boys,” soldiers who fight for him, treat him as a god to be worshiped and sacrificed for. The plot surrounds the women who Immortan Joe forces to breed with him: A rogue Imperator, Furiosa (Charlize Theron), attempts to rescue them. Immortan Joe and his hoard give chase, and Max is brought along to bring the rogue Imperator down. After surviving the first onslaught of the chase, Max finds himself with no choice but to aid the Imperator in saving the women, and again just as in Road Warrior, Max begins his quest strictly seeking survival but ends up choosing the noble path because he starts to believe in the cause. 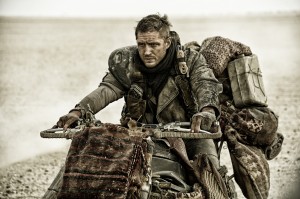 Fury Road is certainly the best film in the series, but what gives it its quality also sets it apart from the franchise and makes it not “feel” quite like a Mad Max movie: there is exposition, real motivations for characters, and coherent dialogue. There is a cohesive style throughout the film and a sense of order. This is the first time in George Miller’s world that I felt like I knew the rules by which these people live: there is trade, alliances, religion and distances traveled. It felt that at last, Miller had the resources to bring his world fully to life. Max’s character is also much more understandable in this film; rather than subtly imply that Max is haunted by his past, the movie tells us straight away. Frequent (but not over-done) quick visions of a child he failed to protect distract Max, and voices follow him wherever he goes. Max is Mad, after all, and this film shows us a fully fleshed out character on the edge of sanity.

What’s truly remarkable about this film is how much plot exposition and character development occurs with such little dialogue. Max himself had so few lines I wonder if Tom Hardy simply had laryngitis during filming. The film bypasses expository dumps in the form of character monologues by instead having characters talk about things as if they were normal and understandable. The Immortan Joe religion, for instance, is never fully explained but I feel as though I have a firm grasp on its basic theology just by the war-boy Nux believing he’s destined for Valhalla when Immortan Joe simply looks at him. In this way, Fury Road shows rather than tells, and the result is a connecting narrative, fully realized and cohesive expressed to us during what is essentially a two-and-half-hour long chase scene.

And my goodness, what a chase. Every moment was actually heart-pounding. There was a true sense of peril each time an enemy vehicle closed in on our hero’s war-rig which is another remarkable thing about this film: we know the good guys will win and the bad guys will lose, but just enough good guys die for us to never know who will make it and who will not. The weight of the danger was enhanced by the emotional connection we felt with the characters—remarkable since we barely got to know them. (This film is a benchmark for efficient storytelling!) This emotional weight of the characters was reflected by the literal weight of the action: every punch to a face, every roar of an engine, every shot in the head felt real and visceral. Not to preach on the anti-cgi pulpit, but I will say that this film had minimal cgi (excluding a beautiful sandstorm sequence), and it connected to me in way that cgi-laden action films of late never have been able to.

Hardy’s performance is not a standout for him, but it is on par with his spectacular record (if you don’t love Hardy, watch Bronson, then we’ll talk) His Max inherited the animalistic growls of Mel Gibson and combined them with the confused swagger that we’ve come to love from Hardy. He’s a different Max, a stronger and quieter Max, but the frantic and crazed look in Hardy’s eyes was indeed Mad. Charlize Theron completely immersed herself in Imperator Furiosa. Max’s and Furiosa’s chemistry was electric, but in a very unique way: they become unintended metaphorical parents to the helpless breeder women whom they are protecting. They begin to work in sync, like an old murderous married couple. There are no loving glances, no attempts by Furiosa to get under Max’s armor, and no attempts by Max to show Furiosa that she needs a man in her life. 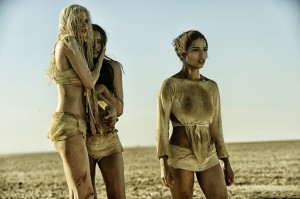 In this way, Fury Road is a step forward for feminism and equality in action movies: Furiosa is a warrior woman who is physically damaged (she only has one arm) messy (she smears oil on her forehead as a fashion statement) and not over-sexualized. There’s no make-over scene, no hidden beauty underneath the sweat, no need for her to feel feminine: she simply is a strong character in this world who happens to be female. I was excited about this aspect of the film in particular, because having these attributes in a female character in an action movie is so very rare. Where Theron’s Furiosa was all strength and hardness, the other females in the film flew to the other extreme: the “breeders”, (evil deity guy’s many wives) were helpless, scantily clad Victoria’s Secret models whose first scene was essentially a wet t-shirt contest. I was initially crest-fallen that a movie with such potential to be a feministic leap for mankind fell into the trap of using such clichéd eye-candy. But, as I watched on, I began to see them as characters and not merely cargo.  They began to use their beauty as weapons. At one point, the favorite “wife” leans out of the car shielding Max and Furiosa with her body because she knows that Immortan Joe won’t risk shooting her. The women in Fury Road exist in both extremes, ugly and beautiful, and every one of them ends up being fleshed out, meaningful and worth-while to the plot, another remarkable feat accomplished by Fury Road.

Fury Road has set a high bar for action films: fully realized world, fully fleshed out characters, fantastic performances, and breathtaking visuals, all going full steam ahead without wearing the audience out. The movie is brutally fun and, honestly, beautifully relentless.