In a world, ten years ago, when there were no more than a couple superhero films a year, when superhero films were not planned out over five years in advance, when Marvel had not yet hit on the record breaking financial success of The Avengers and their individual superhero films, when a popular superhero could not be guaranteed a film or three, when Robert Downey Jr. had not yet given his iconic turn as Tony Stark, in short, in a world before the current cinematic superhero saturation began, Christopher Nolan started his own Batman franchise, reviving the dark knight and invigorating the superhero genre with a film that was highly acclaimed by critics and even more so by audiences.

While 2008’s Iron Man might be the most obvious choice for the film that started the current influx of superhero films from Hollywood, mostly because of its box office success but also because it initiated the Avengers’ franchise, 2005’s Batman Begins launched a franchise that would eventually rival Marvel’s success both financially and critically. Personally, I have always regarded Nolan’s dark knight trilogy as superior to most of the many other superhero films, but that was when Nolan’s films were all more unique offerings. So the question becomes: how does Batman Begins hold up in a post-Avengers world?

To be honest, the last time I watched Batman Begins (before rewatching it for this review) was one month post-Avengers and a couple weeks pre-The Dark Knight Rises. And three years ago, I still thought it was pretty brilliant and better than The Avengers. However, The Dark Knight Rises was a slightly disappointing conclusion to Nolan’s trilogy, and his most recent film Interstellar was my least favorite of his oeuvre. So a second, and perhaps more pertinent, question would be: how does Batman Begins hold up for a former Nolan enthusiast who has recently been more critical of his work?

In answer to the first question, amidst the excess of superhero films Hollywood is currently producing, Batman Begins remains one of the best. If anything, it has improved in comparison to movies such as The Amazing Spiderman and Captain America: The Winter Soldier. Nolan’s themes of conquering fear and learning from failure are not the most original, but I admire the way he explores them. The idea of accepting one’s fear as a cross which strengthens one may not be developed to its full potential, but I will take that in a heartbeat over a generic theme of “teamwork is important” or “the selfish hero must learn to put others first.” Additionally, with his dabbling in philosophy, Nolan provides food for thought rarely found in superhero blockbusters.

Regarding the second question, watching Batman Begins (★★★★) for the first time since The Dark Knight Rises and Interstellar, I have to remove half a star from my former 4.5 star rating. The same philosophical dabbling that elevates Batman Begins over most superhero films is the source of its biggest flaws, especially considering the direction in which Nolan took the trilogy. Nolan appears to have two hats as a filmmaker: a meticulous puzzle crafter and world builder, and a beginner philosopher. I am a huge fan of Nolan the puzzle maker (Memento and Inception), but I now find Nolan’s philosophizing mildly intriguing at best and awkwardly trite at worst. 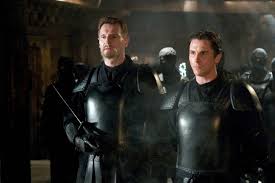 Watching Batman Begins now shows off Nolan’s skill at clever world building and structuring connections throughout the entire trilogy. It also reveals flaws and oversights regarding the existentialist theme that our actions define who we are, which runs throughout the trilogy. Batman/Bruce Wayne (Christian Bale) repeatedly argues that the citizens of Gotham are good people, as Ra’s al Ghul (Liam Neeson), then the Joker (Heath Ledger), and finally Bane (Tom Hardy), all try to prove him wrong. In conjunction with The Dark Knight Rises, Batman Begins makes clear that the only film in the trilogy to strike the right balance between good and evil in its portrayal of Gotham citizens is The Dark Knight, because that is the only film to portray even an ambiguous act of goodness on the part of Gotham citizens.

The rationale of Ra’s al Ghul (and Bane as well) has always reminded me of God and Abraham’s conversation in Genesis 18:20-32 regarding the fate of Sodom, when God promises to spare the city if He can find as few as ten innocent people. Nolan decreases that number to one or two, and then he creates villains who do not remotely grasp the mercy of God, leaving Batman to fight on behalf of mercy for Gotham. The problem is those one or two good people are not ordinary citizens of Gotham, but people sidelined outside the realm of the city. Steven Greydanus first noted this in his review of The Dark Knight Rises three years ago, but a line from Batman Begins puts it into sharp relief. Ra’s al Ghul claims, “Only a cynical man would call what these people [Gotham citizens] have lives.” Recalling the reign of terror self-inflicted by Gotham citizens in The Dark Knight Rises, it is difficult to disagree with him. 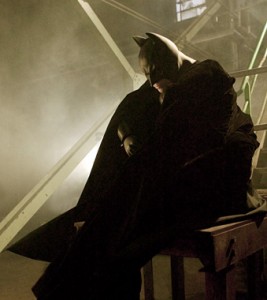 How damning a flaw for Nolan’s first Batman installment is the knowledge of what happens in the concluding chapter of the trilogy? As far as I am concerned, not very. I think it mostly stems from Nolan’s weaknesses as a philosopher; after raising the ideas, he fails to follow them all the way through. However, Batman Begins fares better than his recent philosophizing in Interstellar because it is more subtle and it leaves the viewer with more to ponder, such as a question Nolan may not have foreseen: is Gotham deserving of mercy even if it is devoid of goodness?

As to the rest of the film, the cast is fine, with Cillian Murphy and Gary Oldman being standouts; after the chronological jumping of the prologue, the plot moves at a brisk pace; the editing is a bit chaotic for fight scenes, which I suspect was an attempt to mimic bat flight —a choice on which I will not comment. Finally, Nolan’s ethical questions, which are slightly clumsier than his detailed puzzle crafting, are nuanced and thought provoking enough for Batman Begins to remain in my book as one of the stronger superhero films of the past decade.