I feel as though I have been here before.

In 2012, after seeing Jennifer Siebel Newsom’s Miss Representation, I compared myself to the proverbial frog in the gradually boiling pot. It wasn’t so much that I was not conscious of the abysmal representation of women in the media and its insidious effects on those who consume it (i.e. all of us) as that I underestimated how easily we become accustomed to the status quo. It wasn’t so much that we have lost our capacity to be shocked but that as each new example of outrageous behavior stretches the limits of credulity, what was once thought beyond the pale now seems par for the course.

I got some nice feedback for that essay–mostly from women–and I felt good about having my consciousness raised. Then I more or less went about my business.

Flash forward three years and Shannon Sun-Higginson’s GTFO: Get the F&#% Out (★★★½ ) serves less as a wake up call than as a reality check. Think that the forces of political correctness are having their way in our society? Think that those in our society who have been historically marginalized are being integrated without backlash into the positions and places that were previously off limits? Think again. Women make up over 40% of the gamers, but only a very small percentage of programmers. Rarely are women gamers marketed to and those who attempt to enter tournaments or simply play online are subject to abuse and threats.

GTFO makes some indifferent gestures at theorizing what makes gamers or trollers wish rape and murder on those who dare to play or even write about the games they love. Anonymity, herd culture, peer pressure, the emboldening effect of majority silence are all mentioned. These are all credible as far as they go, but you know what? I actually appreciated the film’s ambivalence about explaining these behaviors. Because I don’t really believe that these attitudes and behaviors are exclusive to gaming. Perhaps–perhaps–they are a little more overt online, but gamers are a subsection of the broader community. The attacks of service on female journalists, the e-mail bombing, the comment trolling, the pornographic manipulation of images, the unending cascade of threats again women’s bodies are phenomena that I think reflect our broader cultural attitudes and filter down to the subcultures rather than ones that infect the broader culture by escaping their smaller enclaves.

The film smartly evokes the double bind that most women in misogynist (sub)cultures face: speak out and one becomes a target for even greater abuse, remain silent and one gives tacit consent to the feeble arguments that such behavior is tolerable.

For all the miserable realities about the landscape faced by females in society, GTFO is not an anti-gamer or anti-gaming film. It is pro-women, and it is more interested in how women navigate hostile landscapes than in why men make them so. Like Jennifer Siebel Newsom did in Miss Representation, director Shannon Sun-Higginson smartly interviews men who are equally disturbed by cultural trends to avoid making the film come off as anti-male. Teammates of a female gamer describe the complicated calculus between wanting to stand up for their friend and yet not wanting to perpetuate the stereotype that she cannot take care of herself. 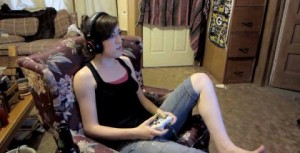 I felt–and feel–pretty strongly that the gamers in GTFO are a microcosm of the broader society. That being the case, the question is not really what about gaming emboldens this behavior but what it says about us that we tolerate it. I have a vague sense that the very hyperbolic nature of the rhetoric is somehow meant to inoculate it from being taken seriously, as though the “I am sure they didn’t mean it literally” defense of harassment and threats is anything more than an attempt to tell the victims that it is up to them to put up with it because we simply can’t be bothered.  Anyone in the public sphere who has received anonymous threats of violence understands the psychological toll of being the recipient of such messages. As a journalist and teacher, I’ve received a few.

For women who refuse  to sit on the sidelines and let men decide what jobs they can have, what opinions they can state, or even what games they can play, such threats are hardly few and far between. They are the everyday misogyny tax that not only injures the women who receive them but which rob us all of the passion, creativity, skill, insight, and wisdom of the women who might otherwise enrich our lives by sharing their gifts…if we would only let them.

Sun-Higginson answers a question during the Q&A about whether the film was anti-gamers or portrayed gaming in a bad light:

Tags: GTFO: Get the F&#% Out, Shannon Sun-Higginson