Editor’s Note: Anyone can disagree with a review. Actually attempting to respond to the criticisms in it rather than simply dismissing them is a bit more challenging, particularly when that review was written by one of America’s most respected and admired film journalists. When news of the imminent sequel to To Kill a Mockingbird reminded me of Roger Ebert’s famous take down of the book’s film adaptation, I asked Rachel Davis to do just that. Here is her reply.

In January of 2015, Harper Lee, author of the beloved novel To Kill A Mockingbird, announced plans for a sequel, to be released in summer of the same year. Fans went wild. The original novel, published in 1960, tells the story of a summer in a sleepy little town in Alabama and the events of that summer surrounding a white lawyer representing a black man accused of a crime he did not commit. The novel was made into a film just two years later, starring Gregory Peck in one of his best known and loved roles, that of Atticus Finch, the aforementioned lawyer.

In 2001, noted movie reviewer Roger Ebert gave To Kill A Mockingbird two and a half out of four stars in his review (and a “rotten” vote at Rotten Tomatoes), implying that he felt it was a naïve interpretation of the time period. Ebert says that, “it expresses the liberal pieties of a more innocent time, the early 1960s, and it goes very easy on the realities of a small-town Alabama in the 1930s.” He has a few specific examples of plot points he found to be problematic, all of which are addressed from a very cynical mindset.

Ebert was certainly well renown as a film reviewer, but one cannot help but feel that he is addressing the film from different perspective than the narrative intends. Ebert was born in 1942, and To Kill A Mockingbird was released when he was 18 years old. To Kill A Mockingbird is set in the 1930s, before Ebert was even born. He would have no way of discerning the book’s historical accuracy through direct experience. He would have to rely on stories from others. In contrast, Lee was born in 1926, and she would have been around the age of her child narrator during the events of To Kill A Mockingbird. Lee’s perspective, as a child growing up in south during the 1930s, is undeniably more authoritative than her critic’s. 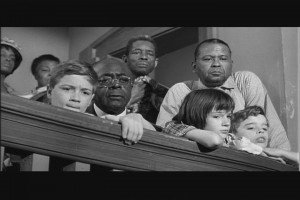 Ebert feels that To Kill A Mockingbird deemphasizes the violence and brutality that would actually be involved in its situations. Also, more than even searching for brutality, real or imaginary, Ebert is looking for the emotion. In the courtroom scene, when Tom Robinson is proclaimed guilty for a crime he did not commit, Ebert is seeking the reaction from the women in the courthouse, from the black people seated in the top seats. He forgets that this is still a courtroom drama. There is emotion, the shocked looks on everyone’s faces convey that, but this is a scene where silence can add as much dramatic effect as outward weeping and gnashing of teeth. It can be compared to a funeral scene, for this essentially, is Tom Robinson’s funeral. If the people sitting in the top of the courthouse realized this–and most of them would–they would show him the respect he is due. 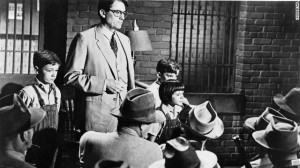 Ebert’s problem with the film’s second half is how idyllic it seems in some places, especially where Atticus Finch’s six year old, Scout, convinces a lynch mob to go home, out of sheer childish anger. He feels no lynch mob would be stopped by the voice of one child telling them how ashamed of them she is, but he seems to be addressing this as a narrative problem, rather than a thematic element. Ebert also appears to be attributing this scene to the film, when in reality, it is part of Lee’s original work. That cannot be credited to the scriptwriters, as much of the dialogue also comes straight from the original text. It is worth noting that Horton Foote won an Academy Award for the screenplay and Lee a Pulitzer Prize for the novel. 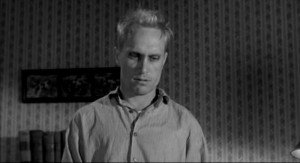 That the story’s conclusion is criticized for being naive or too “upbeat” is ironic considering how bleak the bulk of the narrative actually is. To Kill A Mockingbird ends with both an innocent and a guilty man dead, a failed criminal defense, and a grown man attacking two young children on their way home from school. The one spot of hope in the film’s ending, the neighborhood recluse finally coming out of his home, Ebert dislikes. “Now we are expected to feel good because the events got Boo out of the house,” he says. I don’t know what he would like, perhaps for the film to end tragically? For the protagonists to be unsuccessful until the end? His error is assuming that we are, indeed, supposed to feel good by the end because Boo Radley finally emerged from his house. The film does not end happily, and not everything is suddenly neatly wrapped up by the narrative. The audience is not suddenly going feel good about Tom Robinson’s death or forget about him because of the appearance of Boo. Atticus doesn’t. Scout doesn’t. It is more of a bittersweet ending than anything. If Ebert experienced mixed feelings on his viewing, perhaps that is the exact reaction the filmmakers intended.

Yes, it’s true that one can’t have a bittersweet ending without elements of sweetness. The latter is provided by Boo Radley finally leaving the house. It is not a fairy tale ending, and it’s not supposed to be. But wouldn’t it be nice if all problems were resolved in the same vein as To Kill A Mockingbird? Where even when the world seems at its bleakest, there remained a spot of hope? To Kill A Mockingbird merely emphasizes that hope spot. We would be foolish to criticize this as a negative. Who says hope can’t be grounded in truth?