John May isn’t a man of strong convictions. Half way through Still Life (★★½), a film directed by Uberto Pasolini, May orders a black tea in a convenience store. “You should try our hot chocolate. The new machine is gorgeous,” the cashier hints. May takes an extended, one might say awkward, pause. “Alright, a hot chocolate please,” he replies without blinking.

May, played by British actor Eddie Marsan, is a curious character and Still Life is a curious film. A mostly ignored worker for the Kennington Borough Council, May handles funeral arrangements and writes obituaries for London’s forgotten deceased. These men and women frequently rot for weeks before they are discovered. May contacts any family members he can find, urging them to at the very least, claim the body. “It’s not too late,” he tells one disgruntled son who never cares to see his father again. Often times, it is May himself that takes the last look at family photos, record albums, and other possessions left behind.

No one quite understands what makes May tick, including his cost-cutting boss Mr. Pratchett (Andrew Buchan) who promptly fires him with only the promise of good references so he can get a “job with the living.” May begs to finish his last case: a man, Mr. Stoke, who died in the apartment flat across from him. Subsequently, finding the friends, family and history of Mr.Stoke becomes an obsession for John May and Still Life.

With its distinct Britishness and hard-working protagonist, Still Life brings to mind Kazuo Ishiguro’s famed book-turned-movie about an aging butler, The Remains of the Day. In Ishiguro’s tale, the butler, Stevens, uses a countryside car trip as an opportunity to grapple with his repressed emotions and failures. Stevens’s ego, quest for self-importance and imminent retirement looms large in the novel, particularly in contrast to Ishiguro’s muted and minimalistic style. At the conclusion of The Remains of the Day, it’s not just readers who are cognizant of Stevens’s mistakes; the butler himself is drowning in regrets. 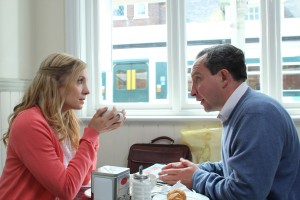 Pasolini’s May has the same precision as Stevens, (in one solitary scene, we watch May perfectly set his dinner table for one) but he lacks any of the challenging introspection that defines Stevens and solid character development. Throughout Still Life, May discovers a handful of Mr. Stoke’s personal tidbits; Stoke fought in the Falklands War, served a short prison term, and left behind a daughter, Kelly, who piques May’s romantic interests. As for May? We never learn about his parents, childhood, or any of his personal history at all.

Without a past for May, Pasolini’s film stalls within its thematic limitations. Ideas associated with memory and redemption, so prominent in Remains of the Day, never grab hold. May is such a mystery, such a blank slate, that even his attempts to honor the dead grow dull. It never becomes clear why May has chosen such a solitary existence. Did the rest of the world reject him? With Pasolini unwilling to show his hand, Still Life’s hour-and-a-half run-time feels much longer. 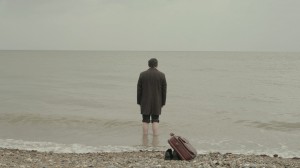 Pasolini, at the very least, makes some interesting aesthetic choices. The film is shot in various shades of gray and white that appear to signify the dullness and repetitiveness of labor in a post-industrialized society; Cinematographer Stefano Falivene really puts the white in white-collar worker. Filling May’s office with plenty of natural light ensures that the film never feels cramped or claustrophobic. Thus, May has the room he needs to explore the cases of the recently deceased. One scene of Still Life, in which May lies down outside and stares at the sky, is beautiful for its universalism and simplicity.

Editor’s Note: Beyond this point lie some potential plot spoilers.

Perhaps the most interesting part of Still Life is its ideological leanings. With Great Britain’s Conservative government cutting public spending and even the famed NHS, Pasolini’s film can be viewed as an implicit defense of the welfare state. May does little to improve business competitiveness, but goes above and beyond in his attempts to help people. A dutiful public servant is hardly the first thought that comes to mind for many citizens railing against big government;often times the government is perceived as distant and hostile.  Pasolini’s vision of public institutions as watchful, family members unwilling to abandon the people may be awfully naive in an era of widespread governmental gridlock, but the sentiment is noble neverless.

With about 10 minutes left, Still Life is permanently altered by a jarring plot twist. After so many scenes that lull the audience to sleep, Pasolini brings the film to a neat ending that invokes Meyer Wolfsheim’s reply to Nick in The Great Gatsby: “Let us learn to show our friendship for a man when he is alive and not after he is dead.”  May, who spends Still Life as a quiet acquaintance of the dead, never had any real friends; he was a hero only by being a ghost in his own life story.