The third installment of Peter Jackson’s Lord of the Rings trilogy, The Return of the King, won the Academy Award for Best Picture of 2003.

The third installment of Peter Jackson’s Hobbit trilogy, The Battle of the Five Armies, slogged to a weary finish in December of 2014.

In between his two tours of duty in Middle Earth, Jackson helmed two non-Tolkien inspired films: a strange adaptation of Alice Sebold’s The Lovely Bones, which at least introduced us to Saoirse Ronan, and a three hour remake of King Kong.

I did not review King Kong in 2005, but I thought it significant that I remembered it being a much bigger critical flop than it apparently was.

Kong has solid numbers at both Rotten Tomatoes and Metacritic. Its high profile admirers included Dana Stevens (New York Times), Peter Travers (Rolling Stone), and Jonathan Rosenbaum (Chicago Reader). The latter say that “Kong is anthropomorphized to the point of becoming first an audience stand-in (for whom Watts performs a few vaudeville turns), then a Christ figure.”

J. Hoberman of The Village Voice gives the highest profile dissent, comparing the film unfavorably to the first Narnia film(!) and calling it “acutely self-conscious without being particularly self-reflective.”

Among my friends, most of whom liked the Lord of the Rings trilogy more than did I, the film was enthusiastically anticipated.

Peter Jackson films tend to be overlong and full of awkward tonal shifts. For the first forty minutes or so, this film is mildly interesting and better than I remembered, but once the company gets on the steamer it’s all downhill.

There are two action set pieces on Skull Island, and they are both extended to the point of farce. Ann Darrow (Naomi Watts) runs away from some dinosaurs, and the combination of computer animation and live actors looks sloppily edited and unrealistic. At one point Darrow seems to outrun a dinosaur. When the company is running away, the visual shots are reminiscent of Jurassic Park. When Darrow momentarily gets on a different vertical plane than her pursuer, the film evokes Temple of Doom. Other scenes, such as one one involving bats, look like ads for the inevitable video game tie-ins that no doubt followed. 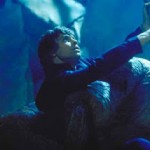 Even when the film shows Darrow in Kong’s paw it somehow seems more reminiscent of Return of the Jedi than the original Kong.

But Raiders of the Lost Ark, despite its one sustained chase scene, had a storyteller’s sense of pace. The problem here is not so much the three hour run time. There are plenty of long movies that keep me engaged, but Kong feels like it would be bloated at two hours.

Kong tosses Darrow from hand to hand while fighting off three dinosaurs, only to go over a cliff and continue the battle in mid air, swinging through and among overgrown vines. Watts screams while hanging from one dinosaur’s teeth and swings perilously close to another’s. The scene comes across as though Jackson challenged his writers to see how long they could keep it going. There is no real sense of peril, no emotional weight (Darrow appears to fall for the big guy later), and, honestly, no sense of artistic wonder.

Oh, at times it feels like Jackson is in awe of his new technology and what it can do, but never at what he has done with it.

The tonal shifts? A black sailor tutors his white apprentice by quoting a few lines from Joseph Conrad, and that somehow makes the portrayal of the island natives (both in the movie and in the show within the movie) okay, because, well…Heart of Darkness has many impenetrable themes that can only be spoken in hushed tones. None of these characters matter much at all, as evidenced by how little emotional impact is created when any of them die. (Try this experiment: see if you can remember the death of any secondary character in Kong, then see if you can remember how Robert Muldoon [Bob Peck] or Dennis Nedry [Wayne Knight] checked out in Jurassic Park.) 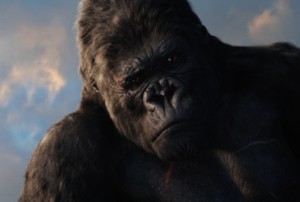 Kong goes on a rampage, roaring and throwing rocks in the air to express his machismo. When one rolls back down the mountain and hits the petulant Lothario in the back of the head, I could almost imagine hearing Jackson in the editing room asking his sound crew for a rim shot. Darrow and Jack Driscoll (Adrien Brody) have less chemistry than a showgirl and a giant ape.The film’s biggest laugh comes when Carl Denham (Jack Black) says he can’t get “Fay” for his his movie because “she is making a picture with RKO.”

Even when Kong is on the top of a skyscraper in what should be an impossible to mess up cinematic climax, the pacing is all wrong. He makes eyes at Darrow, they share a tender moment, and then…the planes come into view from around some buildings…and then fly away from the pair…and then circle around…and then come back…and finally engage Kong in battle.

In my household it has become customary to say “Peter Jackson, that’s how its done” every time there is a basic, straightforward cliffhanger on a television show like, say, The Good Wife. That was born when the first Hobbit movie inexplicably didn’t end with Bilbo finding what would turn out to be the Ring of Doom. It references the puzzling fact Jackson, more so than most directors of his stature, will sometimes succeed in pulling off the most audacious bits of technical showmanship and then fumble the most basic elements of rudimentary storytelling.

Both The Lord of the Rings and The Lovely Bones are rich novels filled with complex story lines. One would think, though, that source material like Kong’s would allow Jackson to ramp up the action without having to worry too much about moving a story forward. It turns out, though, that without the Titanic size inertia moving the plot forward that Jackson’s film becomes a gargantuan object at rest that never really gets moving.

Here’s an interesting footnote to King Kong. After starring in the film, in her next ten movies Naomi Watts subsequently worked with David Lynch, John Curran, David Cronenberg, Michael Haneke, Tom Tykwer, Rodrigo Garcia, Woody Allen, Doug Liman, Jim Sheridan, and Clint Eastwood. Whatever Kong‘s problems are, and they are several, she certainly wasn’t one of them.