Welcome to the inaugural edition of “To Stream or Not to Stream? I will be taking a look at films that are mostly available as DVDs or through streaming on demand, and I will try to highlight what some of your better choices might be. I won’t give star ratings to these films, but I will try to give an indication of what sort of viewers might be interested in these selections.

A Small Section of the World is already available through most streaming venues.Mostly set in Costa Rica (but with a brief academic excursion to Europe at the end), it is a little more substantial than a public service announcement. The promotional material for the film suggests that it presents how a group of women “sparked a revolution in the coffee growing world.” The actual story is a bit more complicated. The Costa Rican women do enter into the fiercely competitive market, but by their own admission, the funds from coffee are not sufficient to live on. They supplement their income through eco-tourism, opening a small lodge adjacent to the coffee mill where the curious can stay.

The women form an organization called ASOMOBI. The most interesting story is probably Samanta’s. She is studying agribusiness and uses ASOMOBI as a case study for her academic work. The end of the film bends over backwards to give the appearance of a happy ending, but I am still not sure if the business model celebrated in the film actually works. Of interest primarily for those who follow business, finance, or agricultural issues.  The film is available via FilmBuff on iTunes, Amazon Instant Video, Vudu, Xbox, Playstation Network, Google Play, and Blinkbox. 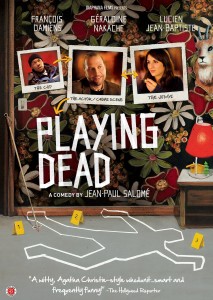 One doesn’t normally think of murder mysteries as “cute,” but First Run Features’ Playing Dead (Je fais le mort) fits that bill. François Damiens playes Jean Renault–like the car, not the director of The Professional–a prickly actor who finds himself blacklisted for his commitment to the minutest details of his craft.

When Jean takes a job as a body double for corpses in legal reenactments of crimes, the joke is that his obsessive adherence to method acting makes him notice inconsistencies in the official narratives of how the crimes were committed. At first the pretty inspector and the police don’t appreciate his ad-libbing, but as he gets closer to the truth, he also becomes more likable.

The film misfires slightly with a detour to another case that appears inserted for no other reason than to make Jean wear an S & M outfit, but the last act plays like the Agatha Christie movies of the 70s that I grew up with.The film is available on DVD and Video on Demand beginning January 6, 2015. 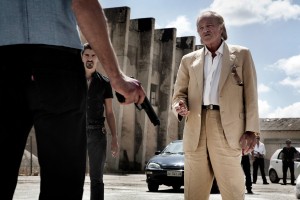 Film Movemet’s Salvo is already streaming on Amazon (and other sources). It was one of the more popular entries in Film Movement’s monthly subscription service during 2013, and it will be available to non-members for purchase in January 2015.

Salvo (Saleh Bakri) is an Italian hit man working in Palermo. When he encounters a blind girl at a house he has broken into, he spares her life. Of course that decision leads to unforeseen circumstances. The plot of Salvo is fairly conventional, but its visuals are a bit out of the ordinary. Salvo has long periods of silence–the house break-in during the first act covers nearly ten minutes with almost no dialogue–and those silences create a layer of ambiguity that is unorthodox in this genre.