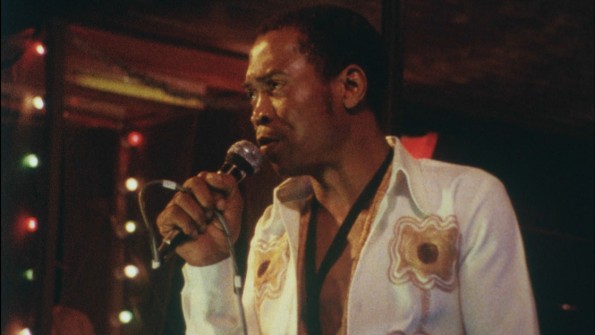 Alex Gibney is one of those directors for whom I get in line, even if I know nothing about the subject of his latest film. That’s the only real explanation for why I found myself streaming Finding Fela! (★★½), a documentary about the Nigerian singer, Fela Kuti.

I suspect the other demographic watching the film are those devoted to Fela and his music but unable to pick Gibney out of a film school lineup with Michael Moore and Joshua Oppenheimer. I further suspect that the latter group might enjoy the film a little bit more than the former.

Gibney has been remarkably consistent over the last ten years. Two of his films–Taxi to the Dark Side and We Steal Secrets–-have been among my ten favorites in their respective years of release. Others, such as Enron: The Smartest Guys in the Room and Mea Maxima Culpa, have skillfully made complex subjects accessible for audiences that are increasingly uninformed by journalists about current events.

Perhaps that is why I found myself puzzled by the direction in Finding Fela! There are no individual scenes that aren’t interesting, be they interviews with Fela’s family and friends, vignettes about the history of Nigeria, testimonials regarding Fela’s influence on Western artists (Stevie Wonder and parts of James Brown’s entourage reportedly stopped by to catch the show), or meditations from Bill T. Jones as he produces his own theatrical recapitulation of the Nigerian’s life. How those scenes all fit together to present a unified story is less clear to me.

Maybe they don’t. Gibney has always been somewhat fascinated by controversially flawed figures: Julian Assange, Lance Armstrong, Eliot Spitzer, and Jack Abramoff have all been the subjects of Gibney’s documentaries. Fela’s musical influence is unquestioned, but his treatment of women was apparently deplorable. Fela died of AIDS in 1997, and the rise of that disease provides an historical backdrop for and yet another layer to the story. Maybe the unifying narrative arc here is the filmmaker’s: showing how those we admire are fatally flawed and yet still deeply human.

Jones appears palpably relieved when it occurs to him that he can simply leave Fela’s death out of his stage production. Gibney pushes on to the bitter end. It’s worth considering that by the time Gibney was making his movie, his subject had been dead for fifteen years. Considering that, he does a fine job of piecing together archival footage and tracking down leads. One of the director’s strengths has always been his reporter’s perseverance. Finding Fela! is consistently engaging but never enthralling. For those with a curiosity about the history of music or African politics, that should be enough.

The documentary is available from FilmBuff on Itunes, Xbox, and Playstation beginning in November, 2014.