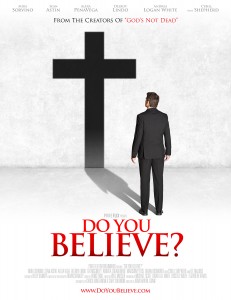 Pure Flix, the film production company best known for God’s Not Dead has begun principle filming on Do You Believe?

It also features Golden Globe winner and four-time Emmy nominee Cybill Shepherd, who cited her love of working in ensemble groups as one of the reasons she chose the film. “I was surrounded by so many wonderful actors, how could I not be good?”

Shepherd was also effusive in her praise of Chuck Konzelman’s and Cary Solomon’s writing: “I cried four times reading the script,” the actress told reporters at a press conference during a break in filming. “I felt very strongly that it was not proselytizing, that it was telling true stories about how we are all interconnected.” She added that “it was one of the best scripts” she has read.

Konzelman and Solomon mostly tried to shrug off criticism of their last script–God’s Not Dead–saying that “if they [love] you in the world, you’ve done something wrong.” They did concede that criticism from Christian critics and viewers was a little bit harder to take. “We’re the only army that bayonets their own wounded,” one of the writers opined. When they hear hyperbolic criticism claiming that they wrote the screenplay for the worst movie ever, they ask rhetorically if even their critics really think that God’s Not Dead was “worse than Hostel and Saw?”

While the perception of critics and secular audiences towards faith films may be slow to change, Pure Flix seems to be be gradually convincing Hollywood stars to bring their talents to faith based films. J. J. Soria said he had turned down the opportunity to read for faith-based films before. It was his character’s background in the military that made him willing to take a look at this script. Lee Majors commented that many contemporary films have simply become too violent for his taste. “My career has always been [stories] that were the good guys against the bad guys,” he said, but they featured “action, not bloodletting.” Majors said that when he considers a project he asks “is there some good in it?” and “do I want the film to represent me?” He also left the press gallery laughing when asked about preferring ensemble work to star projects: “I would never take another series with the word ‘the’ in front of it,” he quipped. McGinley praised Pure Flix for getting in the business “before it was profitable” and “for the right reasons,” saying that its target audience “is dying for product.”

Shepherd also hinted at a more personal reason for accepting her role: “I was born a Christian,” she told reporters, “sang in the choir. Then I lost touch with my savior, Jesus Christ. I stopped talking [with him]. And then I started just talking to Jesus and it started feeling really good, and I got the offer to do this.”

Do You Believe? is scheduled for release in theaters in Spring 2015.