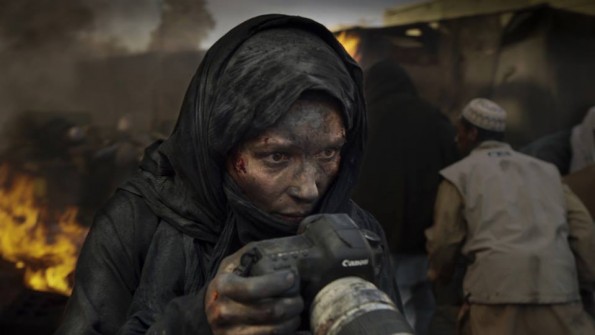 It’s been a good film year for fans of Juliette Binoche. Words and Pictures played a lot better on DVD than early critical buzz led people to believe. Clouds of Sils Maria, currently playing the festival circuit, is the epitome of a showcase piece. And now Film Movement has picked up 1,00o Times Good Night, which is available on demand for those not living near one of the “select theaters” giving the movie a theatrical run. Okay, so we got suckered into watching Godzilla on the big screen rather than waiting for the DVD only to realize after the first ten minutes how small her part would be, but that’s not Binoche’s fault. An actress has to cash a Hollywood paycheck once in awhile, right?

Binoche makes up for her lack of screen time in the summer blockbuster by being onscreen most every moment in 1,000 Times Good Night, and her presence elevates what might have been a Lifetime movie in the hands of lesser talent to something more engaging and serious. She plays Rebecca, a photojournalist who is–depending on who you ask or when you look–either an adrenaline junkie causing her family to live in constant fear of her death or a deeply principled role model trying to make those who love her the most understand how much of her identity is grounded in her work.

The film opens with a nifty set piece featuring Rebecca taking pictures as a woman we assume is a suicide bomber gets outfitted. Rebecca’s actions (and non-actions) during this scene introduce the moral complications of her job, but they also make us understand why she is committed to it. It may be cliche, but a picture is, in fact, worth a thousand words. Maybe we don’t get to look into the mind of a terrorist, but we do get to see the face of terror.

Once the prelude is done the story becomes more personal. When Rebecca and her husband, Marcus, fight, we feel the weight of arguments past. We also feel instinctively that as much as they argue, these two people do love each other. They also “get” each other. The hardest fights between spouses aren’t the ones where each partner thinks the other completely in the wrong, they are the ones where each recognizes a streak of painful truth in the other’s stubbornness.

I also appreciated that the film didn’t climax fully endorse either’s point of view. The conflict with her husband extends to one with her daughter, who is both inspired by and proud of her mother’s work but who also comes to realize some hard truths about its costs.

Much has been made of the fact that the film is semi-autobiographical. Director Erik Poppe was a war photographer for Reuters. The decision to reverse the genders of the couple, to make her the photographer and the husband the parent looking after their children does create a wrinkle that complicates our judgments. Perhaps the ability to empathize with the other person’s perspective is a part of what makes one a good photographer?

As one would expect with of a film made by a photographer, 1,000 Times Good Night is always visually interesting. There are also some tellingly nice bits of writing. A loved one tells Rebecca “I hope it was worth it” instead of asking “Was it worth it?” When Rebecca tries to apologize to her daughter and the young woman angrily picks up a camera at her mother’s most vulnerable moment, holding down the shutter release in a bit of “how does it feel?” table turning, the film is smart enough to let Rebecca stay silent. Juliette Binoche conveys more through her expression than most actresses do in long soliloquies. Always has.