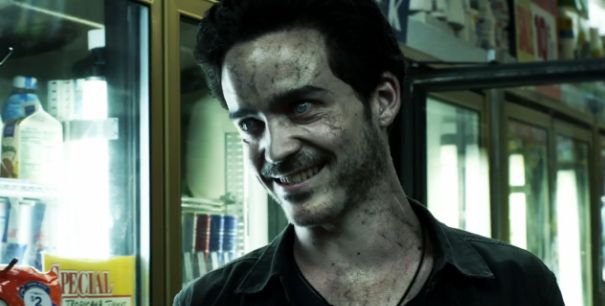 First the visuals. I confess I’m lost. An early scene where a junkie musician enters a convenience store (pictured above) is shot through what looks like a green filter. There are little color pops in each scene. The bananas –or the “Special” sign–create a splash of yellow that keeps things from looking too color coordinated, but rather than creating contrast these complementary colors end up distracting. Or maybe it is just that the average scenes are so visually uninteresting that these color pops pull your eyes to them because they are restless looking for something striking. How can the sets simultaneously look so expensive and so very, very dull?

In Fish Mooney’s club, the dominant color is red. In the Penguin’s restaurant there is a strange lack of deep focus that makes you only able to look at the foregrounded characters. (Take a look over Gordon’s shoulder towards the kitchen in the scene where he is being interrogated by the mafioso.) Wayne Manor has a yellow hue that makes it look hazy–except for the blue notebook that Bruce asks Alfred to hand him.

Moving on, I am also struggling to get to know these characters on their own terms. Oh, I know most of them as iterations of established types, but even when watching a character I’ve scene dozens of times before (like say when I watch a new production of King Lear or Hamlet) I want to see how the performer interprets the character. This means making some choices, not just creating a pastiche of previous portraits. Is Bullock corrupt or just lazy? I don’t know. In one scene he chastises Gordon for interrupting lunch to pursue a crime; in the next, he criticizes his partner for taking “personal” time why they are trying to work a case. Young Bruce is smart enough to make connections the police are missing, and he uses his advantage to…tell the people he is investigating that he is investigating them?

Speaking of the murdered Waynes, is there a hint of suspicion in Bruce that his parents might have been corrupt? Or just blind? Would hat not cause him to have some suspicions about Alfred? I’ve always found Alfred to be one of the great untapped characters in the Batman universe, and I would have to assume the enormous amount of trust the adult Bruce places in his family servant was nurtured and not just natural. The second Alfred-Bruce scene was probably the episode’s best because it didn’t feel the need to have Alfred repeat his objections as a shorthand to expositing what the action meant for the audience. (Compare that with, say, Fish’s bedroom exposition to her boy-toy. I get that monologuing is a convention of the comic book genre, but must every character describe what they are doing while they are doing it?) Oh, and “my mother used to sing that [aria] to me every night?” Really? Who sings arias as a lullaby? Like we wouldn’t have understood there was a personal connection driving Falcone’s pick up without that line?

And yet I did like Bruce’s revealing, “I don’t want revenge; I want to understand how it all works.” I think Bruce is too young, and it would be too idealistic, to have him eschew any vengeful motives unless he had something to replace them with. Here that something is curiosity. When we are hurting, nothing beats a distraction. And yet, paradoxically, there is a hint of intellectualization about the whole endeavor. No matter how many years he devotes, there will be some things he never understands. The elder Bruce could, perhaps, suppress vengeance, but to do so habitually requires the building of, well, habits. I’ve always thought of Batman as being more of an Analytical rather than Structural thinker. Young Bruce’s desire to understand “how it all works” was the first time I’ve seen the child as the father of the man. Pattern recognition is such an important component of the Anaytical thinker, and it is nice to see Bruce not only recognize patterns (the whole city is corrupt) but also question how the parts of the pattern interact (what was Wayne’s role in it?).

Overall, Gotham (both the city and the show) is still a little too static. Patterns are okay, but there needs to be variations within them. I liked, for instance, that Gordon teased out the clues (such as they were) and was able to capture the bad guy without being saved by Bullock (again). The police force can be corrupt, but it needs to function. There needs to be some minimal functioning, even in Gotham, to avoid anarchy. To that end, it was encouraging that we did feel the need to advance the Barbara story line. The show signaled that we don’t have to touch every base every show.

Does the show need fixing? Or is it good enough? Was Venom a step forward, a step back, or just another step in place?