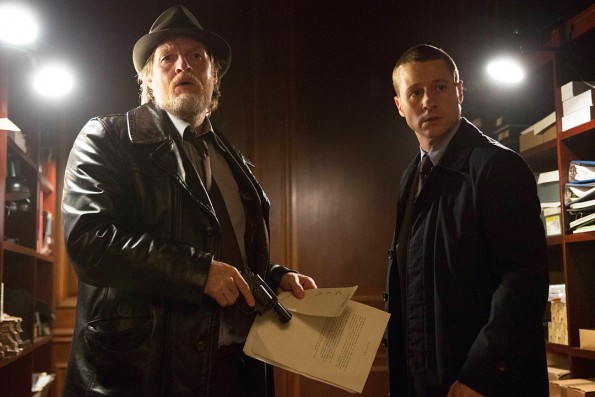 The Video-Game player in me perked way up when I learned this week’s episode was titled “Arkham.” One of the most well-reviewed franchises in games of the last decade, Arkham Asylum/City/Origins and the to be released Arkham Knight have done much to bring a whole new generation of people into the world of Batman. I was incredibly interested to see how Gotham would portray this institution as well if any of the franchise’s canon would be brought into the show or at least used as an Easter-Egg. While not much of that happened (aside from a reference to “Arkham City” on a map) the episode did not leave me disappointed.

As always, let’s get the negative out of the way:

-I can’t quite put my finger on it but the Gordon/Barbara/Montoya story line just really brings the show to a halt. In all honesty, it doesn’t have much of anything to do with the lesbian angle to Barbara and Montoya as much as the fact that relationship issues just do not seem in place in a show like this. If anything, I think it would have been better for Gordon and Barbara to already be married and for the show to explore how a marriage deals with the life Gordon must lead as a man trying to be an honest cop in a crazy city.

-I’ll get to Cobblepot a bit more later, but for now I’ll just say that it’s becoming a bit hard to believe he can commit so many murders that never come back to him. He’s now poisoned three people with food from the restaurant (presumably) that he works at. Maybe Oswald is assuming that Gordon wouldn’t want any attention brought to him as a suspect but the rest of the universe within this show still operates and someone is going to stumble upon those three guys in that apartment right?

-I wanted to celebrate the fact that Barbara and Fish Mooney both seemed to get out of their respective purgatories of the apartment and the night club, but each scene featuring them out of their usual element almost seemed forced as those scenes could have happened in the apartment and nightclub anyway. The idea in moving the characters around, environment-wise, is to give them specific things to do that require them to be at those places. At this point, it just comes across as weak writing.

-I liked Gladwell as the villain of the week, if only because a hit-man is a plausible character in a world like this, but his weapon of choice had me thinking more about how creepy and sinister Anton Chigurh was than about Gladwell himself.

-I haven’t read a ton about this, yet anyway, but I enjoyed how ferocious Ben Mackenzie was as Gordon in the first scene with Cobblepot. The yelling/growling was very Batman like and while this might seem odd to people I think it make sense. Gordon will come to have a unique relationship with Batman, that begins as suspicious, if not hostile, turn into one of trust and support. I’ve always thought that while Gordon stuck to working through the law to serve people, he sees something in Batman that reminds him of his younger self as well as some representation of who he wished he could have been or become.

-So far, Oswald Cobblepot is working circles around everyone else. When he says he can see things a way others can’t he is actually right. The reveal at the end of the episode shows how adept Oswald’s mind can be at playing parties against one another for his own purpose.

-I’m really enjoying what Gotham is doing with young Bruce Wayne. I get that some people’s main point against the show is that it is Batman without Batman. However, I think that complaint just fails to understand what this show is all together. As much as Gotham City is changing and the power players are making their plays, a young boy is grieving the death of his parents and also changing into a person who hates what the city is, hates injustice and is trying to figure out what can be done about it all. The exchange at the end of the episode between Bruce and Gordon was spot on:

Bruce: So do you really think Gotham is worth saving?

Gordon: I think it’s worth trying…

This idea is so central to the heart of Batman that it really cannot be overstated. Batman/Superman #87 has the following exchange, which is one of my favorite pages in all comics and I believe demonstrates Batman’s philosophy quite well:

I know that Batman has been portrayed as someone who thinks he can eradicate crime in Gotham, but I think the best characterization is that Bruce knows he can’t, but that he’s going to try anyway. Seeing the genesis of this idea in his mind is really neat and I thought it was well done. I think more moments like this are the key to this show gaining any kind of longevity, not that they have to involve Bruce and Gordon but that we begin to see the motivation for characters at a deeper level. As much as I complained to anyone who would listen about Lost, I truly did enjoy the back-stories presented just as much as the mystery.

Things seem to be heating up on Gotham and if these events are given great background this show could begin to find a more appreciative audience in die-hard comic fans as well as fans of great television in general.