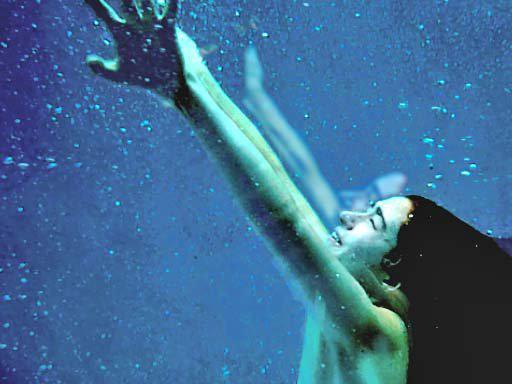 The opening scenes of Still the Water fluctuate between stillness and turbulence, between celebrations of life and bitter reminders of mortality. Initially the camera looks out over the calm sea, and then the waves slowly begin to crash into the shore, quickly growing in amplitude and volume until the sea has turned white. The film then suddenly cuts to black and silence. The next image forms a striking contrast as an elderly man ties a goat upside down, slits the back of its neck, and drains its blood. The film subsequently cuts to a ritualistic dance among the inhabitants of a small Japanese town. During the celebration, Kaito (Nijiro Murakami) wanders to the shore only to discover a naked corpse floating in the sea.

Beginning with the opening shot of the sea, Still the Water captures the sea’s dual nature: majestic and dangerous, capable of supporting an underwater colony of coral, sponges, crustaceans, and fish, and also capable of creating life threatening typhoons and drowning swimmers. That dichotomy of peace and beauty versus danger and chaos continues throughout the film, and that paradox is the very thing that attracts some people to sea while frightening others.

High school students Kaito and his maybe girlfriend Kyoko (Jun Yoshinaga) embody both ends of the spectrum regarding the sea. He finds it scary, because it is alive and has the power to kill. She finds surfing and swimming exhilarating, because it is an opportunity to become one with the sea and observe its beauty first hand, kind of like sex. Yes, she makes that comparison to a boy she has a blatant crush on, making it clear where she wants their relationship to go; however, he resents sex due to his mother’s many lovers since his father left, one of whom directly relates to his fear of the sea. As Kaito incredulously witnesses, Kyoko also has no qualms about diving into the depths in her knee socks, skirt, and blouse right after school, even though there is a swimming ban due to the corpse being discovered.

At its most fundamental level, Still the Water is a coming of age story as Kaito confronts his fear of the unknown, the storms in life outside of his control, for which his fear of the sea naturally serves as a metaphor. Unfortunately, the film takes that metaphor too seriously, and in trying to be profound, some of its advice almost becomes pretentious. “Whatever you want to do, do it,” is not the most insightful way of saying do not be afraid of adventure or of failing. The climactic speech from Kyoko’s father draws a lengthy parallel between surfing and confronting one’s fears. Finding peace by letting the power of the wave carry you to shore, or acknowledging that much of life is outside your control is a worthwhile point, but the idea of “becoming one with the wave” is repeated too often.

In a film filled with contrasts, finding quiet by traveling into the eye of the storm is a central paradox. When life at home with his mother becomes too tense, Kaito flies away to Tokyo to see his father, but his carefree life does not solve anything for Kaito. Conversely, Kyoko spends time with her terminally ill mother and comes to accept her impending death. The scene where she and her parents silently embrace one another on their porch and watch the breeze blow through the trees is touching and beautiful. Equally beautiful are the underwater shots of the ocean as Kyoko swims along the coral reef right off the shore.

Serenity and sorrow are both parts of life, and Still the Water admits that their presence does not always make sense. It also uses that belief to rationalize some dramatic choices which would otherwise stretch credibility as well as some lines which sound goofy even reading them as subtitles. However, the spiritualistic worldview is integral to the island community, which makes most of the drama and dialogue believable within the world of the film, even if the film tries to use that to get away with some contrived storytelling.

Regardless of how convincingly Still the Water depicts the spiritualism of the town, it is undeniably a beautifully shot, deliberately paced, quiet film about coming of age and finding serenity amidst the storms and contradictions of life. Even the camera use reflects the contrasts, alternating between handheld for close-up discussions and steadicam for long distance shots of nature. As the parallel between Kaito’s fear of the unknown and his fear of the sea gradually emerges throughout the film, one recurring idea is that no one can fully understand why tragedy and joy occur in life. An elderly fisherman observes “those kids don’t understand yet what lies in the sea.” Still the Water very obviously asks: does anyone?