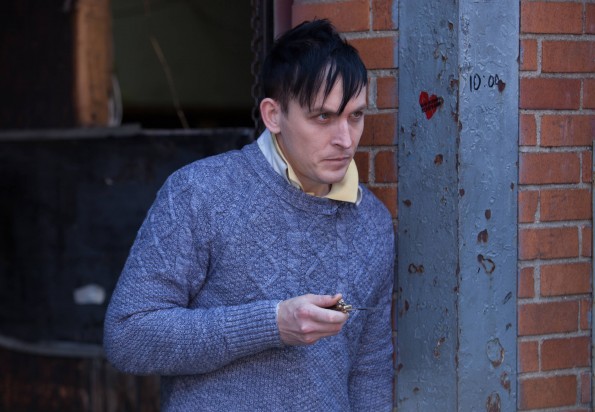 Through most of the first half of Episode 1.3, I found myself impatient. Every scene and interaction seemed the same. It felt pretty early in the series’ run for the episode’s themes to be so stale and predictable. I get that in the first couple of episodes of a series a fair amount of repetition is necessary to accommodate the late arrivers,  but Gotham seemed particularly static. I even commented to those watching with me that for the second week in a row Oswald Cobblepot killed somebody and then ate a sandwich.

Part of what I realized during a commercial break was that too many of the scenes were not just not just narratively repetitious but visually and aurally static. Too many scenes were the same length. Everyone at the Gotham City Police Department snaps and snarls. Even Alfred (Sean Petwee), an historic model of aplomb, is louder and more shrill than what we are used to. I don’t mind that character interpretation so much–it is one of the fewer fresh takes on familiar characters–but it does contribute to a pervasive quality of loudness that makes it harder for me to settle in and get comfortable with these characters.

That’s perhaps why I found myself drawn to a few scenes with as yet minor characters. Pretty much any scene with Barbara Kean (Erin Richards) in it was a welcome relief. Even if the confrontation between Barb and Montoya (Victoria Cartagena) trotted out some well worn tropes–love triangle, recovering addict–it played more sad than mad. So, too, oddly, did the confrontation between Falcone (John Doman) and Fish Mooney. Perhaps my judgment is infused with residual good will from The Wire, but Doman is such a pleasure to watch. Most professional actors would know not to bluster in that role, but Doman doesn’t even give Falcone’s speech much edge, even when he is talking about punishing “whoever” attacked his paramour. Neither is he overly, artificially nonchalant. He’s not trying to convince Fish he doesn’t care, he actually feels indifferent towards her threat. One doesn’t try to intimidate a fly, one just brushes it aside.

So there were some quiet moments, but I would like a bit more variety in the length and tone of scenes. Or the look, for that matter. Just how many scenes do we need at Gordon’s or at Wayne Manor that are shot in front of a fireplace? Will there be any humor or oases of warmth? (The domestic scenes are visually warmer but still filled with conflicted emotions.) The most overt attempt at humor was a horrible misfire: a a Balloonman victim falling out of the sky and landing on a random pedestrian. It’s hard to get us to buy into the heroic nature of Gordon’s quest to save Gotham from despair when the show itself dehumanizes the civilian population or treats it (outside of Barbara) with such contempt. (This was a thematic issue that hindered Nolan’s The Dark Knight as well.)

I am still wondering, too, whether the prequel will come up with story lines that can develop or move forward rather than simply wait for Batman to grow up. Many superhero movies are villain origin stories, but there is a difference between the villain’s arc taking up the first hour of a movie and it taking up the first few years of a series.

But…take a breath. This is episode three. Oswald appearing on Gordon’s doorstep at least assures us that we will be spared weeks of Barbara wondering if Gordon really did kill him and Gordon wondering if Barbara believes him.

Did you have a favorite scene in Episode 1.3? Are any characters beginning to emerge from the ensemble as favorites?