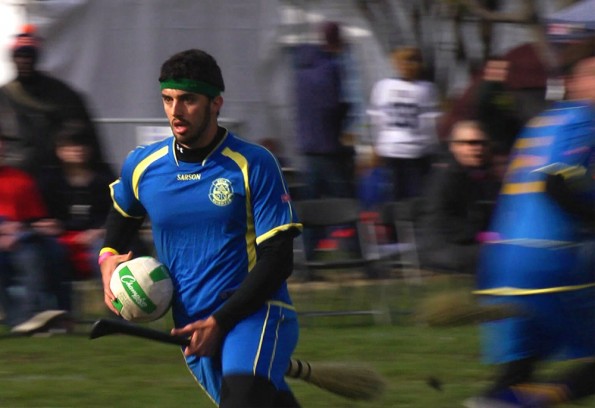 While I read and enjoyed all seven Harry Potter books, I was not what one would call a diehard fan of the series. I never waited in line at midnight for the newest release, and while I saw most of the movies in theaters, I did not feel the desire to rush out opening weekend to do so. However, despite last entering the world of Harry Potter four years ago, I do remember all the quidditch terminology. Thus, it was with a fair amount of curiosity and amusement that I sat down to watch Mudbloods (★★½), a documentary about the rise of quidditch as a sport, originating in the United States, but spreading as far as Norway and the United Kingdom.

Credit needs to be given to director Farzad Nikbakht for presenting the sport, which the players describe as a cross between rugby and dodgeball, as if there were nothing unnatural about it. Within ten minutes, he has collegiate quidditch players explain the rules, he has shown them playing, and once you accept the idea of playing a one handed sport because the other hand is holding a broom between your legs, watching the college students play does not seem any more unusual than watching an ultimate Frisbee game.

The rules are straightforward: the game is played on a regular field with three hoops at both ends which serve as goals. The offense scores ten points whenever they throw the quaffle (a painted volleyball) through one of the other teams’ hoops. If a player is hit with a bludger (a dodgeball), he must run back and touch one of his hoops before reentering the game. The seeker from either team ends the game by capturing the snitch, a tennis ball in a sock worth thirty points that hangs from the back of a player who can wander wherever the rules permit. The only rule is that the seeker must take the snitch without touching the player who has it.

After describing the origins and dynamics of the game, Mudbloods focuses on the UCLA Bruins as they prepare and struggle to raise transportation funds for the Fifth Annual Quidditch World Cup in New York, primarily interviewing Tom Marks, the coach and captain. Ninety-four teams will compete in the World Cup, the favorite being the four time champion, Middlebury College, Vermont, where quidditch as a sport originated. Unfortunately, I found the history and rules of the game more fascinating than the generic underdog story in which we learn teamwork is awesome. It did not help that the friendly rivalry between UCLA and Middlebury seemed to be trumped up quite a bit for the benefit of the camera. Several UCLA players mention that Middlebury is undefeated, and they are eager to be the first team to attempt to beat them. However, looking at the charts, Middlebury plays and loses to Michigan in a round robin before meeting UCLA, and the film ignores that.

Another distracting choice was some of the editing. There are a few times when the camera abruptly cuts to a new take in the middle of an interview, drawing obvious attention to multiple takes and highlighting that much of the documentary was obviously staged for the camera.
On the other hand, I did appreciate that the filmmakers interviewed players from several teams, and no team was an antagonistic threat to the other. We even see players from both teams working together to teach quidditch to excited children.

While the game of quidditch and the tournaments have obviously done a lot of good for the players, I think there are some negative repercussions which the movie does not explore. For one thing, quidditch is a co-ed contact sport, which allows one arm tackles and also permits players to crash into one another as they chase after the quaffle, despite some astonishing discrepancies in size. It seems like injuries should be inevitable, but only one occurs in the film, and it is no big deal as the player quickly recovers. Some of the quidditch players also reach levels of obsession which may be problematic; however, for most of them the sport appears to be a healthy outlet to make friends, practice team work, teach them self-confidence, and channel their enthusiasm for their beloved fantasy series.

Personally, I think Mudbloods would have worked better as a sixty-minute news special. The story would benefit from being more streamlined with less time spent focusing on a rivalry of questionable believability. I imagine that one’s appreciation of Mudbloods will be directly proportionate to his love for Harry Potter and for sports movies. As someone who enjoys the former and finds most of the latter predictable and boring, I very much enjoyed the historic and technical aspects but would have preferred less built up drama.