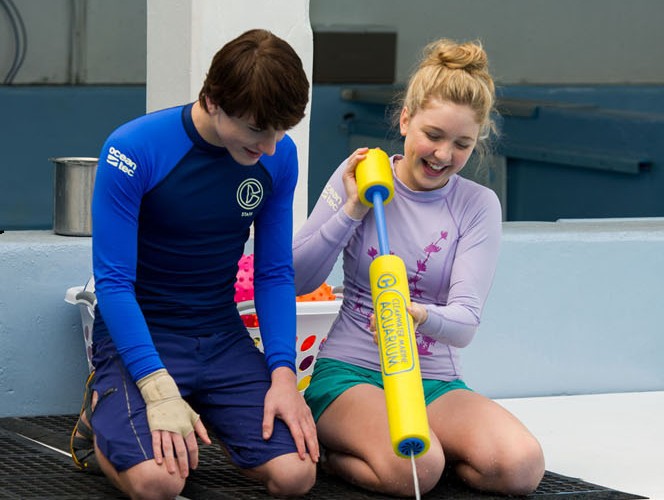 Dolphin Tale 2, premiering September 12, tackles the subject of the arrival of Hope, a baby Bottlenose Dolphin at the Clearwater Marine Animal Hospital. The hospital was first featured in Dolphin Tale, 2011, when a prosthetic was developed for tailless dolphin, Winter.
Now, three years later, not only is Dolphin Tale 2 the first sequel based off a true event, but the same cast returns to their roles, and they are as enthusiastic as they were for the first film.

The film features a diverse range of actors, from experienced cast members Harry Conick Jr. and Morgan Freeman, to young rising actors Nathan Gamble and Cozi Zuehlsdorff, both 16. As befitting the cast of a family friendly movie, the young adult and older actors echo the positive relationships between the characters they portray in Dolphin Tale 2.

Gamble, who plays Sawyer Nelson, and Zuehlsdorff, who plays Hazel Haskett, both find their characters exploring growing up and discovering new boundaries and freedoms. In the first film, both kids are 12 years old; in the sequel they are 15. As a result, they are asking to be treated as adults, yet still retain some of their childhood. Zuehlsdorff highlighted their growing maturity by saying, “Whenever we approach our parents in the movie, it’s not like, ‘Dad, you’re treating me like a kid, you’re so lame!’ [Hazel] approaches him like the adult she wants to be treated like.”

Although they are only 16, these actors realize the importance of highlighting their maturity if they wish to be treated with the same respect. Their relationships with the rest of the cast members, including those playing their parents and other authority figures, emphasize mutual respect. Zuehlsdorff also mentions that parents tell her that their kids watched the first movie dozens of times on DVD; knowing that, she was all the more aware of how her character’s actions sent a message–on that she wanted to be a positive one–to younger viewers.

Gamble owns a photograph, which he keeps by his bed, of him and actor Morgan Freeman, taken at a cast party. It’s a candid shot of the two talking and laughing together, and it’s one of his most prized possessions, due to the influence he cites Freeman as having on his acting career thus far. Freeman is credited with saying of his relationship with Gamble and Zeuhlsdorff, “Children aren’t listening to what we say, they’re watching what we do.”

Likewise, actor Austin Highsmith, another of the film’s adult actors, mentions how conscious she was of how she referred to herself throughout the weeks of shooting and making sure her speech was uplifting, especially to avoid any negative body image that might be absorbed by  young women on set. She also mentions making sure to eat full meals and not deliberately diet, to avoid any body consciousness from young girls watching her.