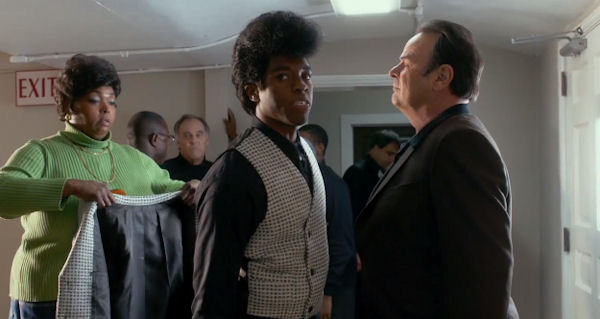 The movie year’s most pleasant surprise thus far, Get on Up (★★★½) surpassed all expectations I had based on its trailer and seemingly confirmed by an overwrought opening scene in which Brown (Chadwick Boseman) threatens a group of sales people with a shotgun for using the restroom on his property. It’s hard these days to play gun violence for humor, and when the shotgun accidentally goes off the film almost lost me before it really got started.

Stick with it, though, and what you get is a remarkably complex portrait of a man who is neither saint nor devil. Anchored by an outstanding performance from Boseman, the the film looks shines all the brighter for the inevitable comparisons to the more publicized Jersey Boys.

Perhaps the thing I liked best about Get on Up was the editing. By eschewing a chronological structure, the script avoids placing too much emphasis on childhood trauma as an excuse for some of Brown’s darker impulses. By intermixing  the scenes of the younger Brown experiencing poverty or racism, the film uses those scenes to complicate our judgments of the protagonist’s flaws rather than simply inoculate us against them. Brown’s selfishness in promoting his own career is contrasted with his willingness to go to Vietnam to perform for the troops. His relationship with Ben Bart (Dan Akroyd) and his performance at Madison Square Garden in the immediate aftermath of Martin Luther King’s assassination illustrate a man who both acknowledges racial boundaries and is willing to challenge them.

The film is also generous with and effective in its simulations of Brown’s performances. A brief meeting with The Rolling Stones before the latter group had achieved megastardom is particularly witty. Brown’s meeting with Little Richard (Brandon Smith) is also a highlight. These scenes aren’t simply there as bits of trivia, though, they illustrate themes articulated elsewhere in the film. The brush with the Stones (Mick Jagger has a producer credit) ties to the introduction’s and conclusion’s claim that bits and pieces of Brown (in this case his performance style) are embedded across music history. The friendly advice from Little Richard contrasts with Brown’s own more problematic treatment of his back up musicians.

The film’s major flaw is that, like Jersey Boys, it doesn’t really know how to end, piling one climactic moment after another. At 136 minutes, the film could have easily been trimmed. Such a trimming might have risked leaving out a few details from the latter parts of Brown’s life, such as a reconciliation with Bobby Byrd, but that might have helped the occasional lapses in focus.

Despite a weaker ending, the film succeeds overall. Even if, like me, you care little for Brown’s music, there is still a lot in the film about race, gender relations, friendship, loyalty, sacrifice, childhood, and determination to give you plenty to think about.

Tags: Chadwick Boseman, Get on Up, James Brown, Tate Taylor