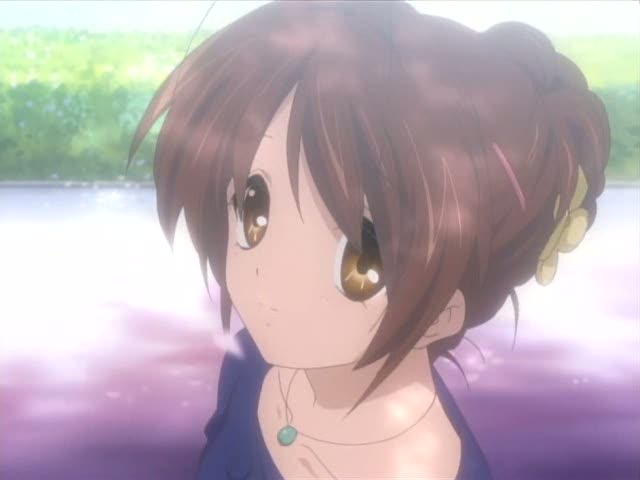 Clannad is an ambitious anime, touching on themes of friendship, family, grief, memory, and growing up. It almost seems like two separate films until two-thirds of the way through, when a frail high school student named Nagisa Furukawa (voiced by Mai Nakahara) performs a one woman play at her school festival. At that point, the many themes clearly come together, giving the narrative focus and also connecting the opening dream sequences to the scenes depicting reality.

The film opens with Tomoya Okazaki (voiced by Kenji Nojmia) waking up covered with sweat from a nightmare that has plagued him his entire life. His dream consists of his consciousness devoid of a body watching a series of disasters; then he is suddenly trapped in a mechanical body that is falling apart. In that body he approaches a tree of promises which emits floating lights, and someone he fears is waiting for him underneath that tree.

The importance of that dream and its parallels with Okazaki’s lonely life is suggested by several dreamlike film techniques; scenes frequently dissolve into one another, the narrative makes temporal jumps, the camera is often tilted, and over half the frames are saturated with glowing sunbeams. The animators masterfully depict those sunbeams as they reflect off glass and obscure the focus of objects in their path. When Okazaki first wakes up, he looks at a photo of his deceased mother, only to have the glare from the sunbeams block the image, which highlights his feeling of isolation. That isolation continues into Okazaki’s school life, where he and his one friend Sunohara (voiced by Daisuke Sakaguchi) refuse to join any clubs. Okazaki is also bitterly resentful towards his father, due to his father’s absence and a fight between them which tore Okazaki’s shoulder tendon costing him a basketball scholarship.

When Okazaki first meets Nagisa, she is surrounded by falling cherry blossoms which blatantly recall the floating lights in his dream, but he is too self absorbed to realize that. Nagisa stands nervously at the foot of a hill and entreats Okazaki to walk up with her so she can go to school – it is soon revealed that she is frequently ill and not very strong. Okazaki agrees, but he is uninterested in seeing her again or even knowing her name. However, he cannot resist escorting the perpetually optimistic girl up the hill a couple more times, nor does he avoid running into her at school. When he asks her why she needs him present to climb the hill, her answer is that she has nothing at school to give her the courage she needs to make the climb. Okazaki naturally suggests she find something, and she does: reviving the drama club.

Unfortunately for Nagisa, no other students are interested; therefore, she persuades Okazaki and Sunohara to be the other members so the club will be recognized by the school board. She promises to write a one woman play so the two of them can work backstage. Her play is based on a recurring dream of her own; however, unlike Okazaki’s recurring dream, hers is not a nightmare, but a beautiful recognition that she is not alone in the world. The same solo flute cue underscores both the play and Okazaki’s dream, further tying the scenes together. It is unbelievable that the last minute production comes off perfectly without any rehearsals, but that is beside the point. Nagisa’s play is a recognition of family and memory, and it serves as the starting point of several lasting friendships.

One aspect of the play necessitates a third act twist, and the film’s attempt to set up that twist does not entirely work. The setup consists of an awkward exchange between two characters that is mildly amusing but does not foreshadow the essential plot point, which makes a later revelation slightly lacking in emotional power. The setup comes during a sequence in which the film briefly turns into a conventional drama, breaking away from the dreamlike structure of the narrative by temporarily eschewing chronological jumps and frames saturated with sunlight. In other words, the scene sends the film down a short detour and does not completely fulfill its function.

Once the film regains its course, beginning with the production of the play, the remainder is a surprisingly moving testimony to friendship, family, and memory. All of those themes are framed by the same dream, a dream that haunts Okazaki, paralleling his life and reminding him he is not alone. That dream is deeply impacted by the delicate, yet optimistic girl who saturates his life the same way the sunbeams saturate many frames of the film.

Clannad is available for streaming from Cinedigm on iTunes and Vudu.