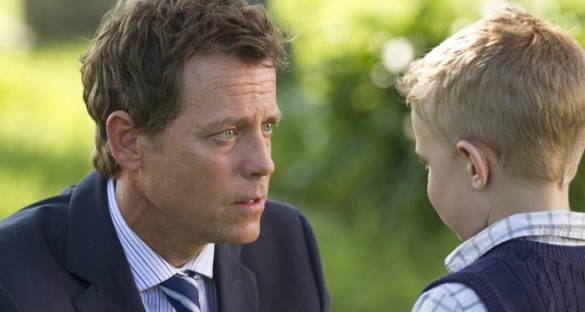 1More Film Blog is giving away a free DVD copy of Heaven is For Real. Readers can enter in one of two ways: check out the 1More Film Blog page on Facebook and “like” the page  to receive updates on new reviews, or leave a comment with below with your favorite film depiction of the afterlife. (If you do both, you will be entered twice.) Winner will be selected at random from eligible entries on Tuesday, July 22, 2014. DVD will only ship to United States or Canada (Region 1).

While you wait, check out my review of the film, which originally appeared at Christianity Today.

I believe heaven is for real. Allow me to get that out of the way up front. About the resurrection of the body and the life everlasting I am as confident as I can be regarding any doctrine that is ultimately an article of faith. About Heaven is for Real, Todd Burpo’s book chronicling his son Colton’s emergency appendectomy and subsequent claim that he had visited heaven, I am a skeptic. That is an awkward but necessary admission to preface the ways in which I thought Randall Wallace’s adaptation of Burpo’s book improves upon its source material and where, perhaps, it may frustrate readers expecting less ambiguity and more vindication.

The film depicts many events from Burpo’s book, though it obscures the timeline between when Colton is operated upon and when he first mentions to his father that he visited heaven. Gradually, under increasingly leading interrogations from his father, Colton reports having sat on Jesus’s lap, seen many animals, having angels sing to him, seeing his deceased, and, finally, meeting his own unborn sister of whom he purportedly had no previous knowledge. This compression is important because irrespective of the content of Colton’s memory, his level of recall seems contrary to the way most current research has demonstrated human memory actually operates. (For a good summary of social-science research on memory, see Chapter Three of Chabris’s and Simon’s The Invisible Gorilla).

Once Colton begins sharing his experience, the film deviates from the book more in tone than in substance. In his book, any doubts Todd has about the authenticity of Colton’s experience are minimized. “By the time we rolled across the South Dakota state line,” he says of the family trip where Colton first reports hearing angels sing to him, Todd was already asking “Could this be real?” The film portrays Todd’s doubts as extending beyond Colton’s experience; he appears to question the existence of heaven itself. In a basement argument with Sonja, Todd comments that they ask kids to believe “this stuff” but that he doesn’t know if “I believe it myself.” Sonja argues that everything Colton has reported is an echo of every story he has been told his whole life. In another scene, conflating a fantasy book’s depiction of heaven with the Biblical account, Todd cries out wondering why does heaven “[have] to be a myth?” Late in the film, Todd says that when he had to face a parishioner dealing with the death of a family member that he “had nothing” to offer in the way of comfort prior to Colton’s experience.

Burpo responded to questions sent through the film’s publicist by praising the film but also denying he had doubts about heaven: “My internal conflict wasn’t about Heaven, it was more about I didn’t know what to believe about near death experiences in general, much less coming from my four year old son.” Certainly by the time he wrote the book, that internal conflict had been resolved, so it is perhaps not surprising that the film would depict Todd as questioning to a greater degree than he himself does when reporting the experiences after the fact.

What is surprising is that the film itself appears to maintain some doubts of its own, hanging back from fully endorsing the authenticity of Colton’s experience. A major visual and thematic motif in the film is that of adults interacting while unaware that they are being heard or observed by children. The first shot of Colton shows him playing in a separate room while mom’s choir practices. In a scene faithful to the book, Todd and Sonja discuss bills and are surprised by Colton’s sudden appearance insisting that they pay the doctors and thus indicating that he has overheard much of their conversation. Colton and his sister share a bedroom and while Todd speaks to Colton the camera pans from across the room, past the reclining figure of Cassie on another bed. Is she asleep? Does she overhear the conversation? We don’t know for sure, but the camera drawing our attention to what Todd is not even seeing certainly struck me as purposeful. Those who want to make Colton’s experience an apologetic of sorts hang a lot of weight on Colton’s knowing things he presumably had no way of knowing. Continually reminding viewers that Colton and Cassie see without being seen appears to leave the door open for a naturalistic explanation to that which believers claim as miraculous.

Less subtle and more problematic is the fact that when the film depicts Colton’s encounter with Jesus, it is not as Colton subsequently describes it. Jesus does not have stigmata marks on the hand we see, but Colton subsequently tells the adults that Jesus has “markers.” My colleague Claudia Mundy also pointed out that Jesus’s attire is different from what Colton describes in the book. Are these simply continuity errors rather than attempts to call into question the reliability of Colton’s testimony? Possibly. Parts of the heavenly encounters are clearly altered from Colton’s description in the book to make them more filmable: Colton doesn’t sit on Jesus’s lap, doesn’t see Jesus’s horse (or other animals), and the heavenly encounters are filmed in earthly places that would already be a part of his memory. Artistic license is a given in book to film adaptations. But Colton mentions the stigmata in the film, and it is hard to believe that in a film that asks viewers to accept Colton’s testimony as gospel the depictions of his heavenly stay would not be carefully scrutinized at all stages of the production.

Whether intentional or not, the changes make the film better as a film. By distributing skepticism evenly across all the characters, even the Christians, Heaven is For Real avoids much of the smugness that marred God’s Not Dead. Like that film, Heaven is For Real has a token atheist/skeptic who is actually angry at God rather than dubious of his existence. Unlike that film, Heaven is For Real doesn’t force a conversion on the skeptic as a means of declaring its own intellectual victory. This film looks inward, using Colton’s story to ask Christians to think through what they really believe rather than focusing all their energy on how to get non-Christians to believe it too. Its dramatic highlight is a graveside conversation between Todd and Nancy (the always reliable Margo Martindale) that at least attempts to wrestle with the “why” questions. Why Colton? Why do so many prayers go unanswered? Why, if heaven is real, does death still sting so much, even for Christians?

Greg Kinnear gives a thoughtful, layered performance that is crucial in presenting Todd as an earnest truth seeker rather than someone trying to capitalize on his circumstances. (The film honestly depicts the Burpo’s money struggles but never hints at much less buys into the cynical criticism that Colton’s experience was being marketed for financial gain.) I did hear one (young) attendee at a test screening complain that Kelly Reilly’s portrayal of Sonja made her seem too frisky, but I appreciated the depiction of a physically affectionate Christian marriage.

I include the overheard viewer’s comment as an example of just how disparate Christian reactions to the film might be. If you are reading this column, chances are you don’t need me to tell you that Christian audiences have rarely been more divided at the movies than they are these days. (I can’t imagine any non-Christians being remotely interested despite T. D. Jakes’s insistence that the urge to protect one’s family is a universal human impulse that would attract secular viewers.) Like the wrong movie and you should be burned at the stake. Fail to like the right one and you are a traitor to the tribe. In such a polarized culture, perhaps the biggest miracle surrounding Heaven is For Real is that it genuinely tries to be as inclusive as possible to the widest spectrum of Christian viewers. My biggest disappointment for the film would be if for doing so it was rejected by those who want Colton’s story to be a trump card in a social debate rather than an invitation to contemplate the mystery of God’s ways.

5 Replies to “Heaven is for Real”